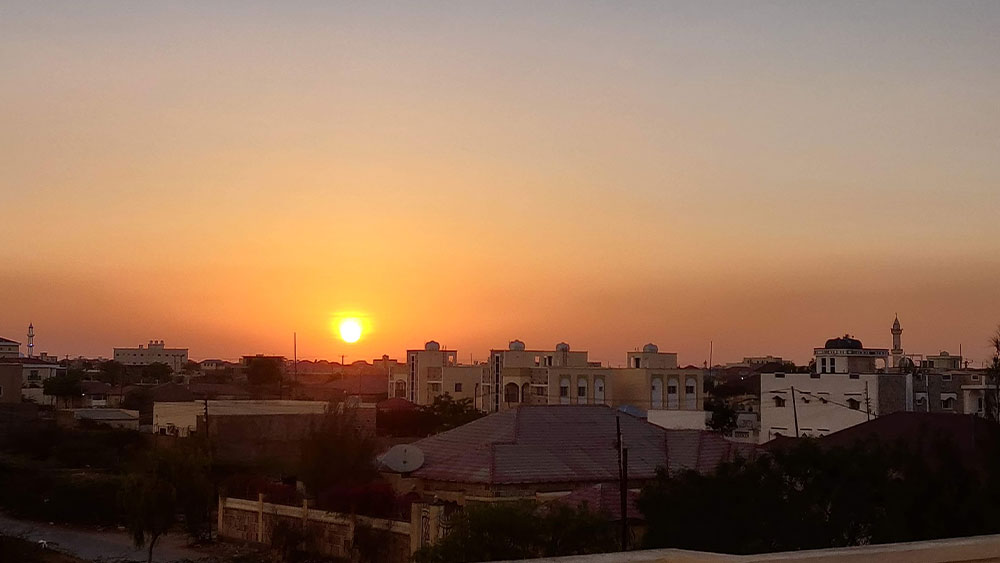 CCF UK volunteer Kristina Grant is currently in Somaliland at our cheetah safe houses helping our staff care for our rescued cheetah and is keeping us updated with how things are going, and what she has been up to. We are doing all we can to shut down the trade in cheetah cubs to feed the exotic pet market, and are currently running an appeal to #EndWildlifeTrafficking to spread awareness and raise vital funds that allow us to continue our work. A huge thank you to all of our staff and volunteers over in Somaliland and Namibia who work tirelessly to care for the rescued cheetahs and provide them with the best life possible. You can support our work by sharing this blog to help us raise awareness, or by donating to our appeal.

Now, over to Kristina…

‘I’ve been around wild animals all my life. Although I am a citizen of the UK, I have spent much of my life in Africa — Kenya — where my family lives. Because we are on the continent, I have had the opportunity to see wild animals in a natural environment and volunteer with several conservation projects that support wild species. Sometimes my work involves animal care, other times it is administrative. I had been volunteering with Cheetah Conservation Fund UK for a few months in support of the fundraising mission when I learned of CCF’s project in Hargeisa, Somaliland, providing care for cheetah cubs caught up in illegal wildlife trade. When I saw the faces of the motherless cubs and learned of their horrible plight, I knew I had to go there and help.’

‘After going through the volunteer application process and confirming my place with the project, I arrived at CCF Somaliland in Hargeisa on a Monday afternoon flight from Addis Ababa. The tiny airport terminal on the runway is full of noise and people jostling to queue, pay visa fees and find their luggage. Two cheerful CCF volunteers from the Netherlands, Lex and Lea, who were on my flight heading for Hargeisa, made me feel welcomed. I was happy to learn I would not be the only “new kid” in town. We would learn what to do together; I had a good feeling we would be successful already because of our easy rapport.’

‘The three of us were greeted by Mark Natt, the CCF Project Manager, and several staff members at the airport. As the CCF Safe Houses are in the same neighbourhood as the airport, we only had a five-minute drive through the streets of Hargeisa before arriving at our destination. After settling in we were given a tour of the CCF facilities. Within a two-block radius, CCF maintains three temporary shelters for confiscated cheetah cubs, Safe House 1, Safe House 2 and Safe House 3. A veterinary clinic for the cubs is included in Safe House 1, and staff and volunteers stay in a residential compound that oversees Safe House 3.’

‘At present, there are 55 cheetahs and one leopard being cared for by CCF in Somaliland. Sadly, on the day I arrived we lost one cheetah that had been struggling with a neurological illness for some time. Fifty-six big cats are difficult to fathom until you see them all. The first time you step inside the Safe Houses is quite emotional for most people, including myself. The last confiscation was in October 2020, so the youngest cubs are now seven-months-old and very playful. The oldest are between two and two-and-a-half years. They represent a cross-section of the cheetah cubs born in this part of Africa in the past three years.’

‘In my first week, I shadowed the keepers, helping to prepare meat, feed, change footbaths, cleann the compounds and carry out maintenance work. Aside from the daily chores and feeding, there are ongoing improvement projects to be done. A big focus of the work we do is ‘enrichment’, which entails providing stimulation to the cheetahs and encouraging them to be as active as possible. This can involve getting them to chase lures, balls, spraying new scents onto pieces of wood, or giving them hay and cardboard boxes to play with.’ 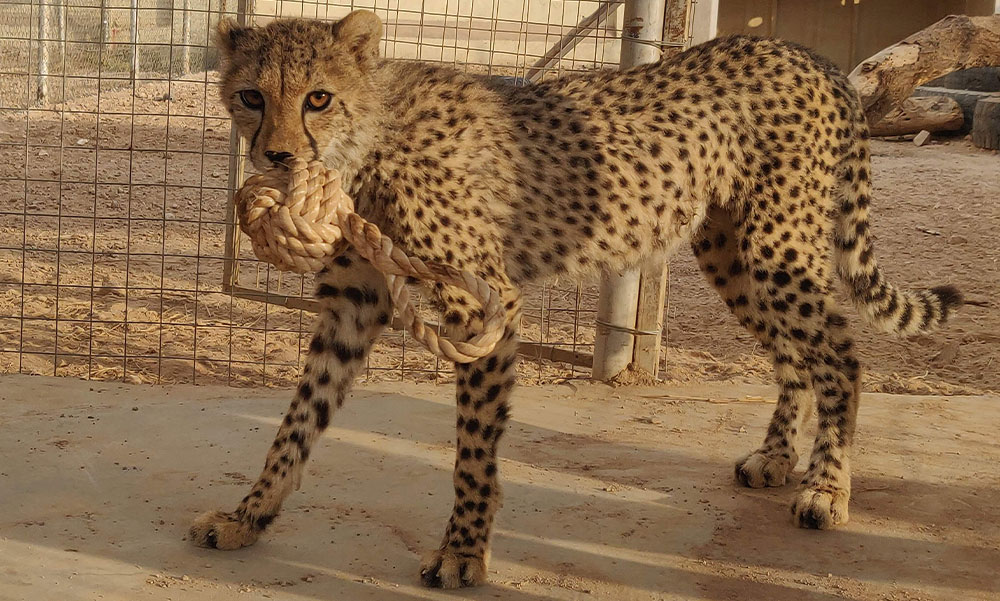 ‘CCF Volunteer Cheetah Keeper Lea and I built two cheetah hammocks from salvaged planks of wood with old fire hose she brought from the Netherlands woven between them. Lea volunteered with the project last year, and she also spent a month in Namibia, courtesy of her employer, Gaia Zoo, in the Netherlands, a CCF sponsor. We hung them in the enclosures from lengths of cable and they look like hanging platforms with a comfy braided ‘hammock’ providing the floor. The cheetahs are usually a bit wary of anything new being introduced, but they took to the hammocks very quickly. It’s now common to see several of them relaxing in the shade or playfully balancing on them as they swing in the breeze.’ 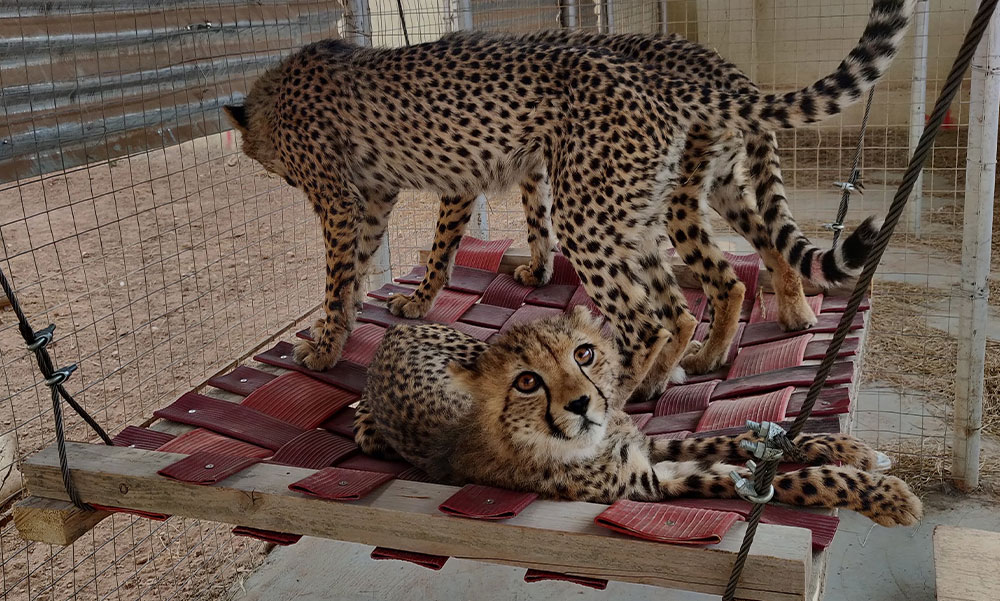 The cheetah hammock in use

‘Last week, the CCF Cheetah Keepers moved thirteen cheetahs from Safe House 1 to Safe House 3 where they have larger enclosures. To reduce the stress of moving them as much as possible, we had to work quickly and efficiently, moving several at a time in crates and giving them space to adjust to their new surroundings. They all settled in very well and are enjoying having the extra space to run in! This also left empty enclosures available in SH1 ready to house any new cheetahs that are confiscated in future.’

‘The younger cubs are fed twice a day, and the older cheetahs and Milo, the leopard, generally once. Most of my responsibility involves providing daily care and feeding for cubs that I have been assigned. It is certainly hard work, and you must be willing to roll up your sleeves and get dirty — but no one said that looking after carnivores would be an easy, glamorous job!’ 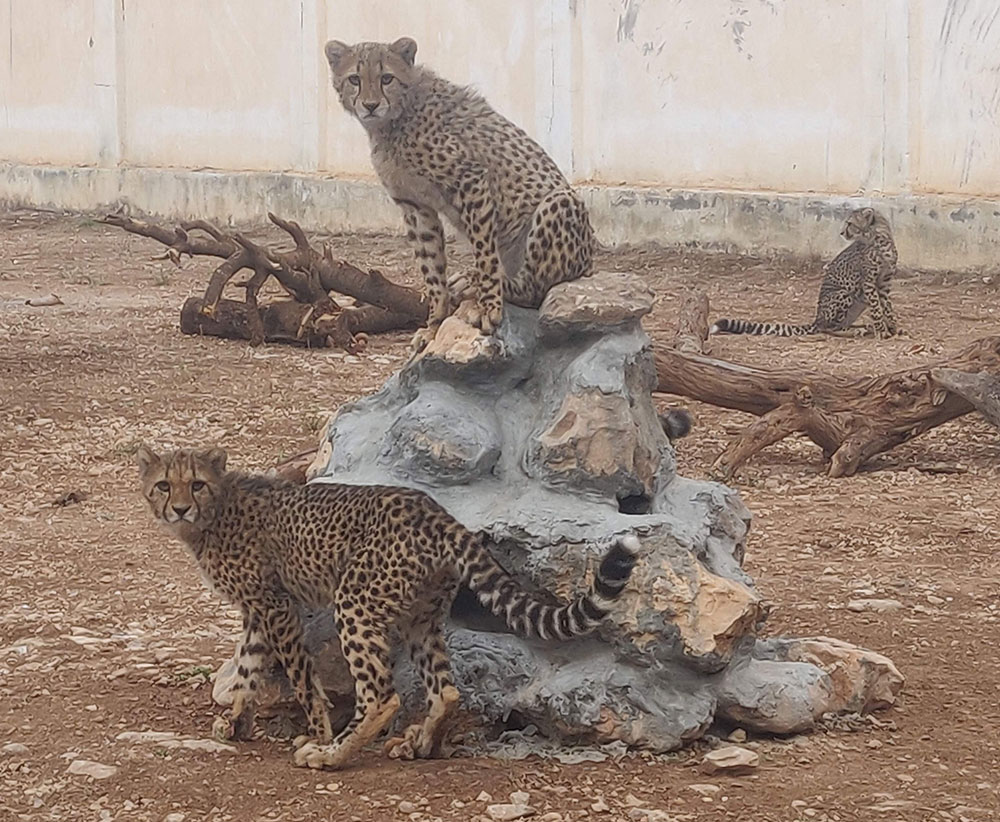 Cheetahs in the wild enjoy climbing trees and termite mounds to get a higher view of their environment. A special built rocky mound serves the same purpose for the cheetah residents

‘For the first week, I worked with the cheetahs in Safe House 1-3, and in the second week I switched to Safe House 2. It’s important that all staff and volunteers get to experience working in all areas and are familiar with all cheetahs here in case staff or animals get sick or plans need to change. The routines are the same, there are just more cheetahs to get to know! They each have different personalities and needs so it’s vital that we know which ones are easy to handle and which get stressed by new people. We minimize free contact with them as much as possible.’

‘This month we are all living in lockdown due to a rise COVID-19 cases in Hargeisa. This is to protect the staff and by extension, the cheetahs; if the staff get sick then cheetah care will become a major issue. As a result, we are not leaving the compounds other than to go between CCF buildings. The local staff from Hargeisa have also moved to live inside the staff houses rather than commute each day. We are hopeful that these measures will not be necessary for long, but ultimately we all still must be very careful of COVID-19. Vaccines are starting to come to Somaliland, and CCF staff are on a list to receive vaccinations, but there is no guaranteed date when this will happen.’

‘Aside from the care work, I have been assisting the veterinary team in administering sub-q fluids, weighing the cubs, and preparing medication and microscope slides. I have also been helping in the office and reading up on confiscation reports and case histories. Sadly, most of the cubs arrive here in very bad condition. It’s a tough reality to face.’

‘So far it is proving to be an incredibly interesting experience and I have learned a huge amount about both the animals and Somaliland. The team are extremely dedicated, and despite the hardships it is fantastic to witness what has been created out of nothing. I plan to stay in Somaliland to help care for the cubs for several more weeks. I look forward to the challenges and learning experiences ahead.’

We’re looking forward to hearing more from Kristina in the coming weeks, but if you want to learn more about the illegal trade of cheetahs, please head over to our #EndWildlifeTrafficking appeal page. 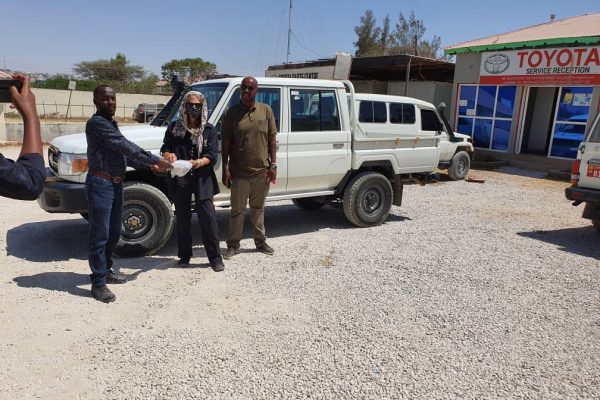 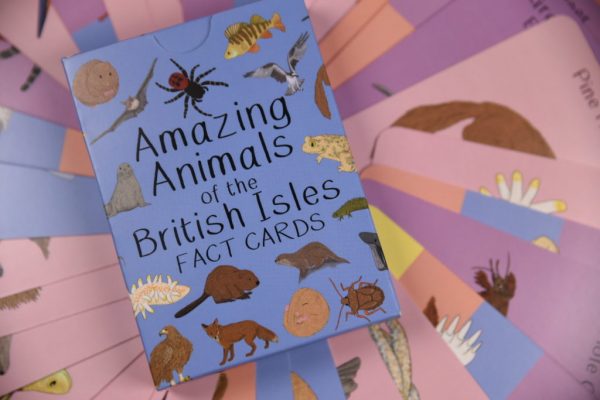