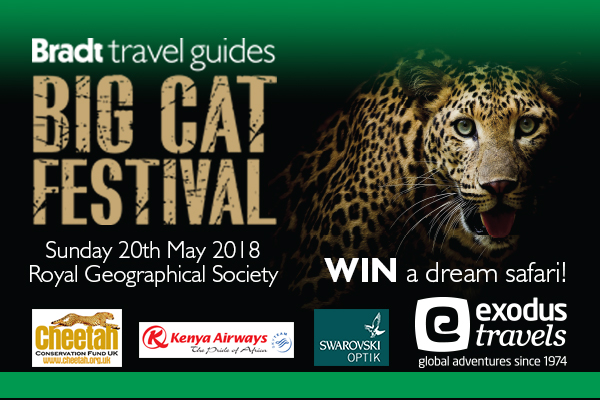 Put 20th May in your diary: it’s the big day out for big cat people! Hear Jonathan Scott talk about living with lions in the Masai Mara, and John Rendall describe how he raised a lion in London. Go behind the scenes of the BBC’s Big Cats series with Series Producer and Director Gavin Boyland, and get feedback on your wildlife shots from acclaimed photographer Paul Goldstein. Explore big cats in literature with nature writer Mike Unwin, and learn from Princess Michael of Kent what it takes to rescue and release an orphaned cheetah cub. You’ll have the chance to ask the experts your questions, get your own wildlife photos critiqued and have your books signed. This really is the ultimate big day out for big cat people.

Plus WIN a dream safari – every adult who purchases a ticket will be entered into a draw to win an unforgettable safari holiday courtesy of Exodus Travels and Kenya Airways. Click here for full t&cs.