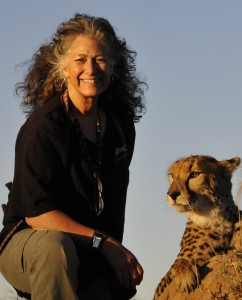 Dr. Laurie Marker is Founder and Executive Director of the Cheetah Conservation Fund (CCF). Having worked with cheetahs since 1974, Laurie set up the not-for-profit Fund in 1990 and moved to Namibia to develop a permanent Conservation Research Centre for the wild cheetah. CCF’s groundbreaking activities are housed at their International Research and Education Centre in the main cheetah habitat of the country.

Among numerous awards, Dr. Marker has been recognized as one of Time Magazine’s Heroes for the Planet and in 2010 she was awarded the Tyler Prize for Environmental Achievement.