Posted on April 2, 2019 Categories: Cheetah Champion No comments yet 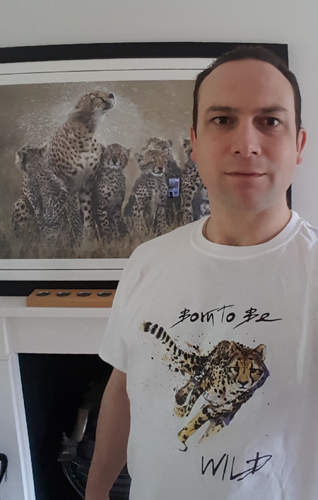 Cheetahs have been my favourite animal since I was a child. They’re not the biggest or the strongest, but they’re outstanding in their field. I found that really appealing.

It was on a trip to the Daniell Cheetah Project in South Africa, in 2010, that I got close to some of the cheetahs. It was an amazing experience but, while I was there, I learnt there were only 14,000 cheetahs left in the world. Sadly, that was an overestimate as we now know from the latest surveys that the true number is half that. I had thought – and I guess most people also think – that Africa was full of cheetahs and other wildlife.

I really wanted to help the cheetah and started by volunteering with the Daniell Cheetah Project to raise their online profile through improving their Digital Marketing – their website, SEO, Facebook, YouTube etc.

While I was doing more research, I learnt about Dr. Laurie Marker and the Cheetah Conservation Fund. They were clearly the gold standard of cheetah research and conservation. I read Dr. Marker’s thesis and signed up to their newsletter. I received an invitation to a CCF UK fundraising art event in 2015 and was very excited to go. I bought a beautiful photograph of a mother cheetah with her cubs and also met Jane, Tony and the rest of the budding CCF UK team.

I was asked to become a member of the team and began work on creating a website for CCF UK. The rest, as they say, is history. I now look after CCF UK’s online presence, SEO, online marketing and database.

As I write this in 2019, I still love working with the team to help cheetahs however we can. The cheetah is now the most endangered big cat in Africa so there is still a lot of work left to do.