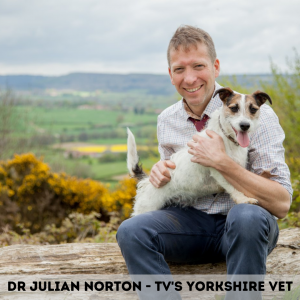 Julian is a practising vet in Yorkshire, and has been for over 25 years. Since 2015, he has been the titular character with the long-running and award-winning Channel 5 series The Yorkshire Vet. Julian is a regular contributor to Springtime on the Farm, This week on the Farm and The Jeremy Vine Show. Much of his career has been based at the “Herriot” practice in Thirsk, although he has recently opened two new practices- Sandbeck Vet Centre in Wetherby and Thirsk Veterinary Centre.

He has written six books, recounting his veterinary stories over the decades and been awarded “Yorkshireman of the year by The Dalesman in 2017. He is actively involved in various charitable organisations to encourage and assist vet students and potential new vet students, as well as rare breeds and other animal charities.

Outside of work, Julian has represented team GB in triathlon and duathlon and competed in the renowned Patrouille des Glaciers ski mountaineering race across the Swiss alps. Julian’s wife, Anne, is also a vet and they are both passionate about big cats, particularly the cheetah, conservation and wider animal welfare issues.

Julian is honoured to be CCF UK’s Ambassador with a particular interest in the livestock guarding dog programme.