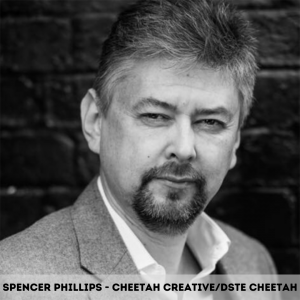 During his time with Really Useful Theatres Group he brought several Royal Variety Performances to the London Palladium and other high profile events including two series of Sunday Night At The Palladium, one series of Tonight At The London Palladium, Comic Relief 2015 and One Night Only with Robbie Williams, and two BAFTA Television Award shows to the Theatre Royal Drury Lane. The world’s biggest music and entertainment artists have played across Really Useful’s theatres during his time, including Elvis Costello, Mika, Brian Wilson, Bon Jovi, Michael McIntyre’s Big Show and Coldplay.

Spencer was also responsible for delivering the launch of the London Palladium’s variety model. He is equally well known and respected for his work in the world of motorsport, including work with A1GP, Silverstone & Rockingham Circuits and Formula E, where he works with Formula E Champions DS Techeetah. Spencer Founded the Cheetah Creative in 2017 with a key focus on product transformation, across the entertainment, music, sports, venue, ticketing, travel, hospitality, Not for Profit and luxury sectors and leading high-performance teams to success in international businesses.

Among his greatest passions is the World of wildlife and Congo, Borneo, Kenya and Costa Rica are just a few of the locations he has visited to see actual field work in action. He held an Ambassador role for the Aspinall Foundation and is currently a trustee for the Gorilla Organization and Chairman of the Fundraising and Development Board for the Big Cat Sanctuary.

He has also worked tirelessly with a number of other charities including; R4UK where he was Chairman, the Henry Surtees Foundation, Demelza Hospice Care for Children where he was Chairman of the Fundraising and Development Board, helping to raise millions of pounds across a variety of creative events and fundraising activities.

He also holds the post of Chairman of the Board of the Showtown Museum Project in Blackpool which is creating a Museum which will put Britain’s favourite holiday resort centre-stage as they reveal the town’s lasting influence on the nation’s sense of fun and entertainment. It will feature the first permanent displays in a UK public museum on circus, magic, variety, and ballroom dance.