Posted on February 25, 2019 Categories: CCF in the News, Illegal Pet Trade, International Collaboration No comments yet 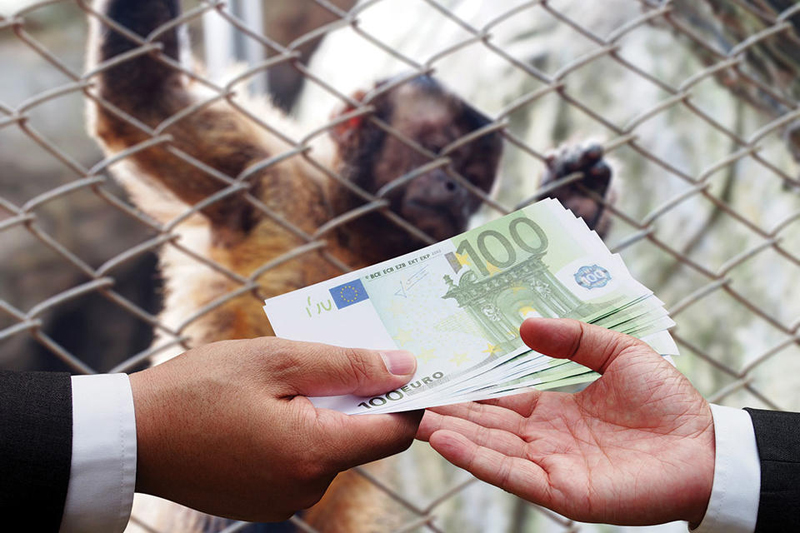 Patricia Tricorache CCF’s Assistant Director Strategic communications and Illegal Wildlife Trade had this to say of a recent article in the Arabian Business Magazine talking about the illegal wildlife trade being fuelled by social media.

“Sobering article about the illegal wildlife trade online, but are people becoming numb to these sorts of articles? I wonder what people in the demand countries think. Is it too much? Too little? Should the narrative be different for governments, social media and internet companies and people in general to undertake more concerted efforts?”

Charlie was ripped from his mother’s arms while he was still nursing.

The baby chimpanzee was born in the UAE, in the same grassless backyard enclosure his mum and dad lived in as house pets for over a decade.

“We received [the adult] chimpanzees as a donation and the owner kept the baby because he was cute… they’d dress him up in baby clothes,” says Kate Burns, a veterinary nurse at Al Bustan Zoological Centre, a sustainable zoo, conservation breeding and research centre in Sharjah.

Pet chimpanzees aren’t the only unusual animals that Al Bustan has received over the years. Declawed lions, arctic foxes, cheetahs, leopards, and Nile crocodiles, originally kept as pets in homes across the emirates, have also been donated.

In December 2016, the UAE became the first Arab country to ban wild pets, issuing Federal Law No. 22 imposing fines and jail time on individuals found guilty of owning, buying or selling, or abusing all types of dangerous, wild and exotic animals. The move curbed the open sale of wild animals in the market. But the crackdown shifted illegal wildlife sales online.

Shopkeepers interviewed at the Sharjah Pet Market, where Charlie’s parents were bought, say they now run the ‘wild’ part of their business electronically, adding customers on WhatsApp, Facebook, Instagram or encrypted apps such as Telegram, where they share pictures of exotic pets kept at private farms across the country, while offering to source others.

It’s like the puppy syndrome. They get them as cubs and they’re cute. [But] as soon as they get too big or ill, it becomes a problem

“Sellers advertise on Instagram and then add you to a closed WhatsApp group,” says Kinda Jabi, who works at the International Fund for Animal Welfare’s (IFAW) Middle East and North Africa (MENA) office in Dubai.

“Online channels provide illegal wildlife smugglers with an unregulated, anonymous and virtually unlimited outreach,” according to Hiba Al Shehhi, Acting Director of the Biodiversity Department at the Ministry of Climate Change and Environment (MoCCAE).

“Most of the ads offering endangered species for sale are posted by fake channels outside the country. We have successfully taken down 60 percent of such content so far. The UAE routinely monitors what is published on social media and meticulously tracks trading in wildlife species, or any attempts to sell protected species in order to take stringent legal action and effectively eradicate such practices,” she explains. But other regional governments are yet to follow with legislation.

Dr. Elsayed Mohamed, IFAW’s regional director for the Middle East, says the organisation has reported hundreds of social media accounts to the MoCCAE, but there is a greater need for enforcement.

Speaking on the condition of anonymity, a former owner of three pet lions in Saudi Arabia says he bought the cubs, which were delivered to his home, via WhatsApp.

“You feel emotion towards the animal and start asking people, ‘Where can I get one?’ You join WhatsApp groups where traders offer all types of newborn animals,” he says, adding that a lion cub costs between $7,000 and $11,000.

The illegal wildlife trade is estimated at an annual range of $7bn-$23bn, making it among the most lucrative global crimes behind drugs, human and arms smuggling, with a cheetah or lion cub at its first point of call in countries including Ethiopia or Somalia costing just $100.

“We didn’t know how to look after it,” he admits. “We felt really bad [but then] we got two one-month-olds. We really loved them. Cubs are not dangerous at all.”

But when the lions reached the age of eight months and were consuming 15 chickens a day, he gave them away to a circus.

We had one lion come through that’s been declawed. Another lion had scald marks on its back, so obviously boiling water had been thrown on him

“It was the worst moment when I gave them up,” he recalls. “Up to eight months it was fine, because [they] would not cause serious damage, but now they’re big and really heavy. I would have loved to give them to a national reserve in South Africa, but I didn’t have them legally so I couldn’t export them. I think governments here must legalise this so we have options for the animals’ welfare.”

Al Shehhi from the MoCCAE says some people’s desire to own an exotic pet stems from the historic and cultural practice to ascribe a perceived high social status to those who keep wild animals in their homes.

“These people fail to realise that such animals are not meant to be pets, and while they are cute and cuddly when young, they prove challenging to handle once they grow up,” she says.

A lion owner in Dubai, who asked not to be named, says he bought his cub for $7,000 from a popular trader through WhatsApp. But it eventually got too big and he sold it back for a fraction of the price. “It’s like the puppy syndrome,” says Tim Husband, Director of Dubai Safari Park. “They get them as cubs and they’re cute. [But] as soon as they get too big or ill, it becomes a problem.”

Only about one in every 10 baby animals survive the journey from the wild to the marketplace, Husband says, yet the trade destroys entire families.

“Just to take that baby from the wild, you usually shoot the mother and then pull the baby off,” he says.

For some, the trauma results in capture myopathy, a disease causing muscle damage from extreme struggle or stress, followed by death. According to Al Shehhi, given the UAE’s strategic geographical location, a number of wildlife shipments transit through its air, sea and land ports while on route to destination countries, but are increasingly being seized as part of the UAE’s crackdown.

IFAW has been training customs officials across the region on how to spot smugglers’ tactics. Cheetah cubs pass for kittens in cat carriers, primates are hidden in hand luggage and parrots are stuffed into plastic bottles. Baby crocodiles, snakes and reptiles are worn as belts.

Yet according to Husband, those caught at the borders and customs are only the tip of the iceberg.

He says: “More people are getting away with it than being caught.”

Ministry figured show that between 2013 and 2017, confiscations in failed smuggling attempts into the UAE have included 21 big cats, including 11 cheetahs and one Siberian tiger, 27 primates, 249 falcons, 85 reptiles and 36 parrots.

Survival rates plummet further after the animals reach the marketplace.

The conditions of the confiscated or donated animals that Dubai Safari has received vary from “physically bad to mentally-retarded”, says Husband.

“We’ve got some gibbons that suck their thumbs all the time, which often happens when a baby primate is taken and they’re looking for security and it becomes a habit. We had one lion come through that’s been declawed. Another lion had scald marks on its back, so obviously boiling water had been thrown on him,” he says.

Burns from Al Bustan says the centre received a cheetah that had been kicked in the head, leading it to go blind. “We had to euthanise it,” she says.

The Cheetah Conservation Fund (CCF) estimates around 300 cheetah cubs are smuggled every year from Africa to the Arabian Peninsula, with cubs suffering a 70 percent mortality rate. But estimates suggest there could be hundreds living as pets in the UAE.

“Someone told me one time that in the UAE alone, there was over 400 cheetahs scattered and over 1,000 lions,” Husband says.

Population estimates show there are only around 7,000 cheetahs left in the wild. The outlook is just as bleak for primates, with four out of six great apes now listed as critically endangered on the International Union for Conservation of Nature Red List of threatened species. Burns recalls the case of a pair of chimpanzees living in specially constructed quarters in a UAE home along with a Filipino maid.

“The owners still have them. It’s like a house built for the chimps with a big outside area that’s fully concrete. The chimps were in bunk beds. The maid hadn’t been home in five years because her job was to look after them,” she says.

According to Burns, however, Charlie and his parents grew up in worse accommodations. “They had a tiny concrete area with no grass and nothing to climb. The chimps had been given a broom and hose. They were expected to clean their own room. When we got them, it took us quite a while to get them outside onto grass because they just didn’t know what it was,” she says.

Burns was called when Charlie went ill. The primate was diagnosed with a nutritional deficiency which Burns refused to treat unless the owner handed him over to be reunited with his parents.

“When we gave Charlie back to his mother, she wouldn’t let him go. She held his hand for two days,” says Burns.

Following the introduction of Law No. 22, owners of wild animals in the UAE were given a period of six months to surrender them to authorities. But Husband says a lot of people have not taken the law or its consequences seriously.

Figures from Dubai Municipality show around 25 animals were surrendered in Dubai, and Husband says only about 10 big cats have been handed in to Dubai Safari so far, which is a “very, very small number”. He adds that he has even heard lions from residential neighbourhood Al Warqa roar back to lions in the zoo.

In March 2018, the IFAW, WWF and TRAFFIC launched a global coalition with 21 of the world’s leading technology and social media companies, pledging to collectively reduce wildlife trafficking by 80 percent by 2020. Facebook and Instagram have signed up as members. But that’s just one step in the fight.

“You also have to catch these people,” Husband says. “Make the penalties so bad that it’s just not worth it. Time in prison, things confiscated, travel bans, make it so hard that people even just toying with the idea don’t want to risk it. There isn’t an infinite number of animals out there. We’ve got to be able to do something to stop this.”

When asked by Arabian Business about specific efforts that were made since they joined the coalition, Facebook and Instagram issued identical responses stating: “Our Community Standards do not allow for poaching or the sale of endangered species or their parts, and we remove this material as soon we are aware of it.”

Neither answered how many, or if any, accounts, pages or posts have been taken down.

The companies said: “We have systems in place to prevent the sale of illegal goods, and do not allow ads around the sale of endangered animals. We use a combination of technology, reports from our community and human review to enforce our Community Standards and we constantly work to improve the ability to enforce our policies through this approach.”

* This story was produced by Arabian Business written as part of the ‘Reporting the Online Trade in Illegal Wildlife’ programme. This is a joint project of the Thomson Reuters Foundation and The Global Initiative Against Organised Crime funded by the Government of Norway. More information at globalinitiative.net/initiatives/digital-dangers. The content is the sole responsibility of the author and the publisher.