Posted on September 3, 2018 Categories: Cheetah Champion No comments yet 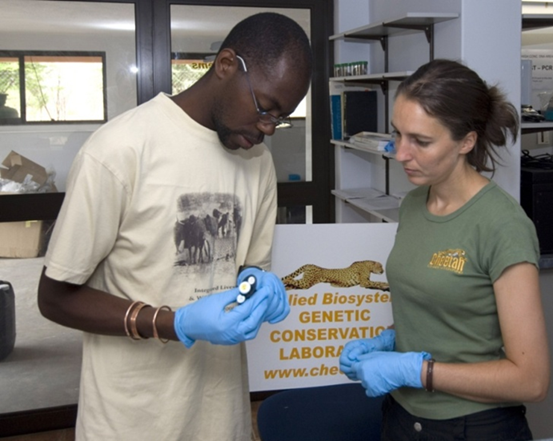 Our Cheetah Champion for April is Anne Schmidt-Kuentzel. Anne is the Assistant Director for Animal Health and Research for CCF, and splits her time between the USA and CCF Headquarters in Namibia.

My name is Anne Schmidt-Küntzel and I work at the Cheetah Conservation Fund (CCF). How did I get to CCF? Mostly by coincidence, or was it fate? I always loved big cats and Africa, and was lucky enough to live in West Africa for 4 years as a teenager. Ever since then, I hoped I would get a chance to go back to that beautiful continent. Following my childhood dream, I became a veterinarian, and while in veterinary school I discovered how addictive and fascinating scientific research, and in particular genetics, could be. I went on to do a PhD in genetics and it was during this time that I was exposed to CCF and its amazing conservation work. 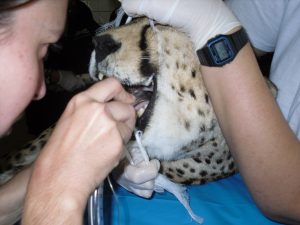 I was working in genetics as a post-doctoral researcher when I heard from my advisor (Dr Steve O’Brien) that Dr Laurie Marker had secured the necessary funds and equipment to establish a genetics laboratory at CCF Headquarters, and was looking for a scientist to set it up. Dr Marker and I then hatched a plan for me to come to Namibia for 6-12 months to set up the laboratory for CCF. Well, that was 10 years ago and I am still a part of their dedicated team of conservationists! The state-of-the-art Lifetechnologies Conservation Genetics Laboratory has been functional since 2008/2009 and, as for me, not only am I still working for CCF, but it has become more of a life choice than a job.

CCF has a multifaceted approach to conservation and research, so it probably comes as no surprise that my job description did not remain limited to Research Geneticist for long, but morphed into Assistant Director for Animal Health and Research after a couple of years. Over time, my work has shifted from being hands-on in genetics laboratory work and veterinary medicine, to being hands-off but involved in most aspects of what CCF does. My normal work day consists of verifying and analysing data, guiding projects, reading proposals, reports and updates or sitting in on meetings, revising protocols, advising on projects and planning the next steps, and working with interns, students and staff. It never gets dull as there are so many fascinating and important projects that CCF leads or is involved in.

CCF studies the cheetah’s ecology, behaviour and biology as well as its ecosystem, which even includes research into bush encroachment. In addition to research, CCF is actively involved in Human-Wildlife-Conflict resolution and runs training programmes for farmers, breeding programmes of livestock guarding dogs, and even education programmes in alternative livelihoods such as crafts and cheese-making.

For the last 3 years I have had the honour of assisting Dr Marker in editing a book that combines all aspects of cheetah conservation and research. It is a book that is as diverse as CCF, and that involves specialists in all relevant disciplines, from all over the world. It was a tough but amazing experience and allowed me to dig deep into topics ranging from genetics and habitat loss to disease, and to learn more about the fields of reproduction, alternative livelihoods, climate change, just to name a few. The book is composed of 40 chapters that cover virtually everything that has ever been studied and published about the cheetah, and has 150 contributing authors. The result is a unique piece of work that presents and interprets current findings to make them accessible to the general public, but also cites the body of scholarly work on cheetahs, making it a reference book for the academic world as well. https://www.elsevier.com/books/book-series/biodiversity-of-the-world-conservation-from-genes-to-landscapes

Today, I spend more of my time in the US than in Namibia, as my work is mostly computer based and I am able to write, edit, and communicate with my team using emails and Skype. One big reason for the change is that I now have a 2-year-old daughter whose father is based in the US, so we come to Namibia twice a year for a couple of months. We are lucky that the job allows for this flexibility as it allows me to continue working on my passion, and we all enjoy the time we can spend at CCF to soak up new energy from the Namibian sun and the wonderful vibes of the organisation.