Posted on March 14, 2019 Categories: Cheetah Champion No comments yet 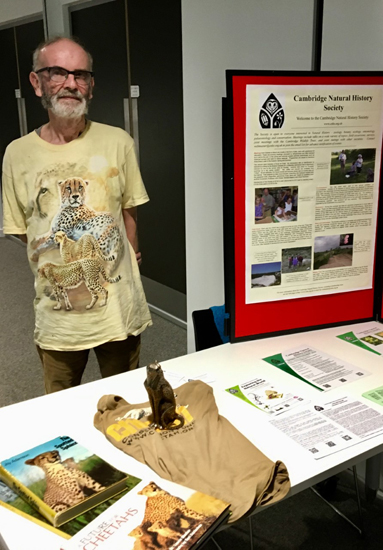 Cheetah Champion Chris Heron, who wrote a blog piece for us in 2018 about his visit to CCF Headquarters in Namibia, has given a presentation at the Cambridge Natural History Society about the plight of the cheetah and the work CCF is doing to save the species. Below, Chris outlines his talk and why we must act now to save the cheetah.

Six years ago, a lost cat inspired my interest in, and love of, Felidae. In researching the animal family, the cheetah became my firm favourite – its unique biology and evolution fascinated me. Incredibly, I found that the cheetah also has a fascinating human history – it was used as a hunting companion in ancient times. Unfortunately, the cheetah now faces many threats including human wildlife conflict and the illegal wildlife trade, and its present distribution has fallen by 90% in the last 100 years to fewer than 7,100 individuals in the wild.

CCF has many strategies to combat this decline in cheetah numbers, including working with local people to improve their livelihoods.

I highly recommend visiting the Cheetah Champion section of the cheetah.org.uk website, which gives personal accounts of those working for and with CCF to ensure a future where the cheetah not only survives, but thrives. There you will find stories from a range of people including scientists, researchers, videographers, marketeers and even the cheetah keepers responsible for caring for the orphaned cheetahs, who cannot be rewilded, kept at CCF headquarters.

I urge readers of this post to do one small thing for the cheetah, be that making a one-off donation to CCF UK, or sponsoring one of the resident cheetahs or one of the Livestock Guarding Dogs at CCF HQ for their long term care. If we do nothing, how will we feel telling our grandchildren ‘They are gone from the world, for we had no room for them?’.

To make a donation to the Cheetah Conservation Fund UK, follow this link: https://cheetah.org.uk/donate

Cambridge Natural History Society 100th Conversazione will be held on the 12th and 13th of April in the Zoology Department, Downing Street, Cambridge. Chris will be exhibiting there.