Posted on June 5, 2017 Categories: Cheetah Champion, Conservation No comments yet 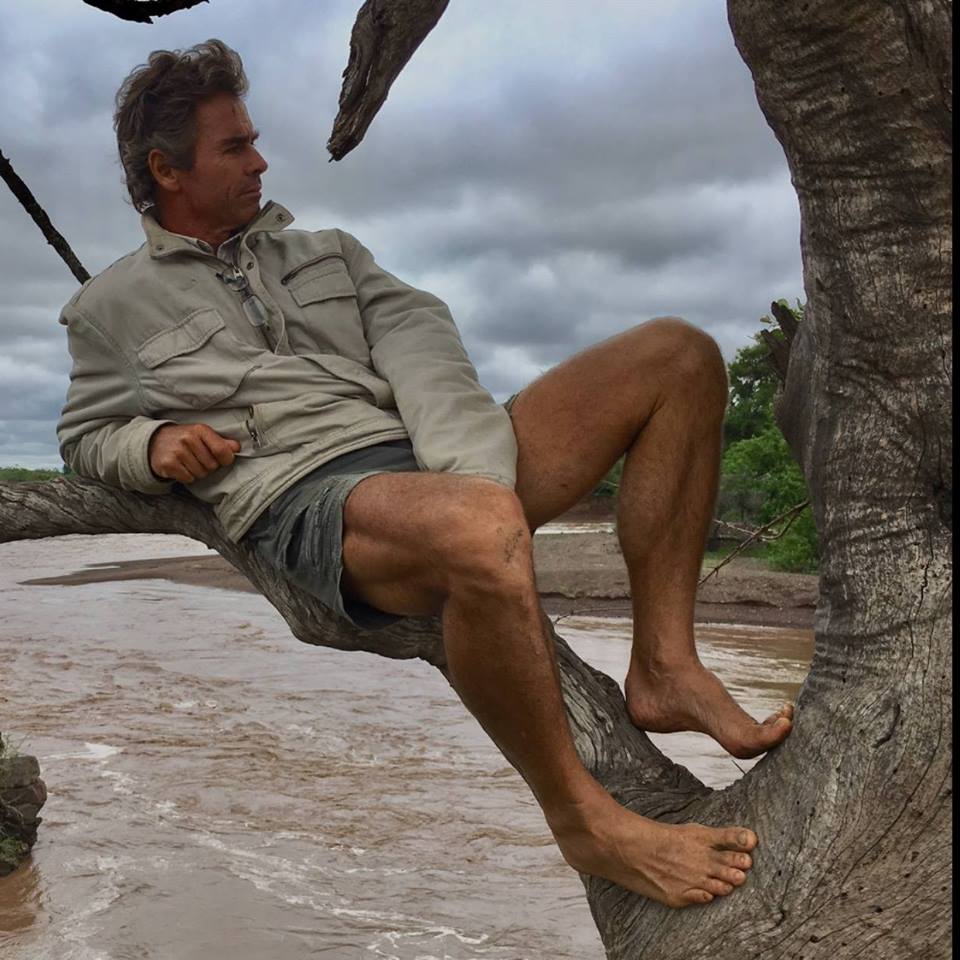 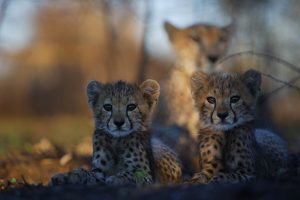 Kim Wolhuter is a wildlife filmmaker and photographer. From a family of Game Rangers and a qualified Ranger himself, he started making films about Southern African Wildlife in 1988.

He has made documentaries for National Geographic, the BBC and the Discovery Channel. His recent project “Cheetahs – growing up fast” (BBC) was narrated by David Attenborough and was received with great acclaim.

1. You started out as a game ranger, why did you change to become a filmmaker?

I have a BSc Degree in Range Management and then went on to follow in my father and grandfather’s footsteps. My grandfather was the very first Game Ranger of the Kruger National Park and my father followed on to become the Head Game Ranger of the Kruger National Park. I was managing several game farms in Botswana and then moved to Swaziland as Warden of Mlawula Nature Reserve. A couple of years in and I got a call from Richard Goss asking if I wanted to join him in making wildlife documentaries. I had never thought of it as a career, but thought I would give it a go and have now been filming for 29 years. My films having won numerous awards including several Emmys. 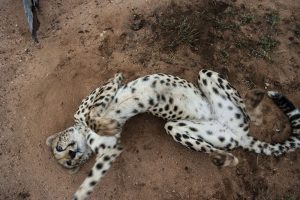 2. What do you find interesting about filming cheetahs, in particular the mother cheetah and her cubs that you followed for a year?

Before doing my cheetah films, “Man-Cheetah-Wild” (Discovery Channel) and “Cheetahs – growing up fast” (BBC), I had never really worked with the cheetah, my films were about all the other African predators. Why would I do a cheetah film in the thick bush of Southern Africa when all the best cheetah films were coming out of East Africa, where it is so much easier to film cheetah on the open plains? AND cheetahs have been filmed every which way possible. There seemed to be no reason or chance to be able to make a film that could come close those. I’d seen a cheetah family with an impala kill and as I approached from over 200m away they ran off. This reinforced, again, that I couldn’t think of doing a cheetah film. Then something changed. I saw the same family a couple of months later. They were playing on an anthill. I approached and they kept playing. I stopped to film them. I was sitting on my bonnet filming with my leg stretched out and my foot near the edge of the car when one of the youngsters stood up on the side of the car and started tapping at my foot. Why were these cheetah suddenly so approachable? I’ve seen this again and again with other cheetah. They get to a stage in their lives when they become incredibly curious. I carried on filming this family until the youngsters moved off on their own. When the mother had a new litter I filmed them for the next 2 years…

This time round I was able to film cheetah in a way that nobody has ever done before after I’d bonded with them. I would walk, sleep and hunt with them in the most natural way because of our bond. During this time it was interesting to see how seldom they would walk on a path. Lion, leopard, hyena and wild dogs will always walk on paths. Not cheetah. When I would follow their footsteps in the bush I would think they would take a certain, easier route – only to have them go through the dense bush. They always avoided eye contact. When lying around they would never stare at me. All your other predators cough up hairballs from the hair they eat when feeding on carcasses. Cheetah eat animal skin too but never cough up hairballs. Other cats love rolling in smelly things. Not cheetah. Cheetah love to purr, where other big cats don’t. They love attention but it’s almost as if they don’t want others to see that they do.

I have seen many films of cheetah in captivity. Although they have grown up in captivity when the keeper arrives to feed them they do an aggressive charge and slam the ground with their paws. Quite terrifying if you don’t know about it. But they never do any harm. My cheetah never ever showed any sign of aggression even if they were feeding on a carcass and I was standing over or lying next to them. I put this all down to the fact that I never fed them or even tampered with their food. After all, life for them is all about food and sex and, if you tamper with their food, you’re tampering with their survival. 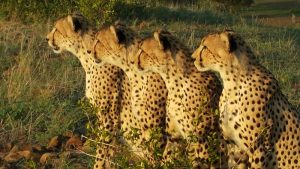 3. What would you say to people who think that interacting with wild cheetah is unethical?

Over the last 29 years of filmmaking I’ve come to understand animals in a very intense, up-close-and-personal way. I film the way I do, always getting out of the vehicle, so that I can film the animal at it’s eye level. In this way I can really engage the audience and get them to feel what it’s like to be that animal. In filming this way I’ve noticed my subjects becoming more and more accepting of me and they approach closer and closer out of curiosity.

With the cheetah, and with hyenas and leopards I’ve worked with, they’ve come right up to me and invited contact. And so my relationship with them develops. Once this happens, I find myself bonding with the animal and they begin to behave totally naturally around me. This means that what I’m documenting on film is completely natural behaviour – they are not concerned with my presence. One can of course use a radio-controlled vehicle with a camera to get in amongst the animals but they are naturally suspicious of it and won’t behave naturally. Also, when following animals in a vehicle, they get to tolerate the vehicle but always in the back of their minds is that niggling thought; ’why is this thing following me?’. They think the same thing when I’m following them. So I have to bond with them. To do so, they have to feel they’re getting something from me and that cannot be food. Feeding them would break down all trust. The only thing I can give them is love and affection. That’s when the bonding begins and that ‘niggle’ goes away, because now I have a positive purpose in their lives.

Part of this bonding process is the fact that I don’t carry a weapon. That way I’m living alongside them on a one-on-one basis. When carrying a weapon one tends to be arrogant, you lose respect for the animal and if it retaliates, what right do you have to shoot it because you have overstepped the mark? By not carrying a weapon, one’s whole persona changes and the animals pick it up.

They read so much in our body language. I must also emphasise that I do not get out my vehicle with the intention of touching the animal. That comes from them, they have to invite the contact. I really don’t see how or why this behaviour is thought to be unethical. It’s a far more natural way of filming than blundering after animals in a vehicle, which causes all sorts of disturbances. And is it not, after all, how we used to live alongside these animals hundreds of years ago? I know there have been suggestions that the animals becoming habituated to my presence makes them more vulnerable to being poached should they move out the reserve into neighbouring areas. Firstly, people’s body language when wanting to do harm is very different to that of mine and the animals pick this up very quickly. But also, why would poachers shoot something on foot when it would be so much easier to approach in a vehicle? After all, animals in our parks have become hugely habituated to vehicles (they just don’t bond with them).

Jane Goodall and Diane Fossey did all their work on foot, just like I do. At the time when Diane Fossey did her work with gorillas it was thought that gorillas were good for nothing – that they were so dangerous they would kill a human at first sight. She changed those perceptions. I hope my work does the same with people’s perception of hyenas. Without Fossey’s work it could be argued that we might not have gorillas around today. 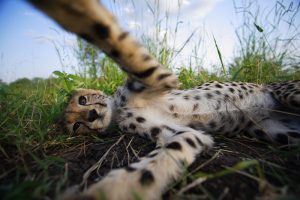 4. Given the dramatic decline in cheetah numbers to fewer than 8,000 wild adults worldwide, do you see a positive future for the cheetah?

It’s a tough one. The decline in their numbers is not so much from ‘man induced disease’ as it is loss of habitat. We have to conserve habitat if we want all these animals to survive. I don’t believe we can only be looking at saving the iconic species, we have to save habitat.

5. What do you think we can all do to help save the cheetah?

I think it’s a matter of getting involved as much as one can, in any way one can, in cheetah projects across Africa. We need to be sure we are trying to save as much habitat as possible.

6. Have you got any plans to film more cheetah documentaries?

Not at the moment. I’m currently busy with a film on hyenas with my main goal being to get people to understand these amazing animals, dispel all myths about them and portray them for what they really are – highly intelligent, wonderful mothers, incredible hunters, amazing communicators and cute and cuddly…!