Posted on May 8, 2019 Categories: Cheetah Champion No comments yet 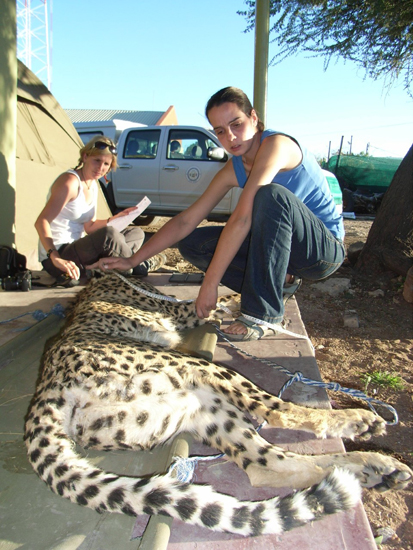 I grew up in London, and despite the urban environment, I had a keen passion for animals from the start. It was only as I finished my biology bachelors degree, that I decided I wanted to work in wildlife research and conservation and I embarked on a pay-to-volunteer three month trip to a game reserve in South Africa. The aim was to get the African bush experience out of my system so I could return to the UK and start a conservation based career. But I fell in love with the sights, sounds and experiences of the African bush. It took some time (during which I worked in a laboratory and volunteered for the London Watervole Project) but eventually I got my lucky break that would bring me back to Africa and to cheetahs. By pure coincidence from talking to fellow spectators at a firework display in London, I found out about Cheetah Conservation Botswana and a one year job opening as a research assistant. I applied and crossed all my fingers and toes, and was lucky enough to be chosen.

Botswana is a land locked country in Southern Africa at the centre of the world’s largest remaining cheetah population. The population of approximately 4,000 adult and adolescent individuals (comprising 60% of the world’s remaining cheetahs) spans five countries; Angola, Botswana, Mozambique, Namibia and South Africa. Like CCF, Cheetah Conservation Botswana (CCB) operates a multifaceted approach to cheetah conservation through research, community outreach, education and awareness raising. The project was started in 2002 by Rebecca Klein, Dr Kyle Good and Ann Marie Houser. I joined the team in 2006 and was lucky enough to watch the project grow from strength to strength. A one-year placement quickly morphed into five years, during which time I took over as the project’s research coordinator, and set up a remote field base on a farm in the small farming community of Ghanzi. 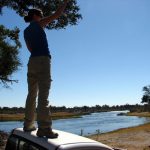 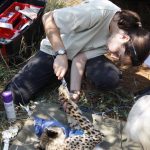 Despite technically being in the research department, I played a large role in all areas of CCB’s work and developed a keen understanding of how difficult and multifaceted the issues of human-carnivore coexistence can be.
Upon leaving CCB in 2011 to move to Tanzania, I maintained a close relationship with the organisation, returning to Botswana in 2012/2013 to conduct research for my PhD on human-carnivore coexistence on game farms.

Despite moving away from Africa to New Zealand then Macau in China, I maintained my love of cheetahs and my involvement in their conservation. I began assisting Laurie Marker with editing CCF research papers for publication and was honoured when Laurie asked me to co-edit a book on all aspects of cheetah biology and conservation with herself and Anne Schmidt-Kūntzel (CCF’s Assistant Director for Animal Health and Research). The book was composed of 40 chapters with over 150 authors and co-authors involved in its production. It was a long but rewarding process, through which I learnt a lot about editing and gained a greater appreciation for the wider scope of cheetah conservation in both a captive and wild setting. The book is on sale from Elsevier and Amazon and acts as a comprehensive reference book for the academic world, while its style and phrasing remain its accessibility to the general public. https://www.elsevier.com/books/book-series/biodiversity-of-the-world-conservation-from-genes-to-landscapes

At the end of 2018 I returned to the UK with my husband and daughter and have joined the CCF-UK team. Despite living on four continents since my involvement with cheetahs began, I have been lucky enough to retain my connection with CCB and CCF and dedicate my time to securing the cheetah’s future. I look forward to future projects and continuing my involvement for many years to come.