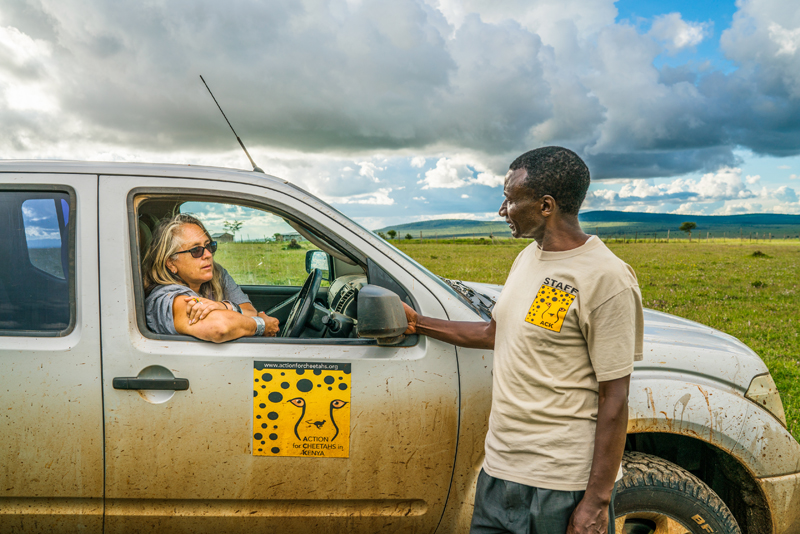 Mary Wykstra, co-founder of Action for Cheetahs in Kenya (ACK), is our Cheetah Champion for July. Pictured with ACK field officers Jimmy Muli (in Salama) and below with Kivoi Letongoine and youth (in Samburu).

I grew up in a small village in central Michigan. Although I always loved animals, I never knew where this passion would take me. My father told me that, at seven years old, I said to him I would one day work in Africa. Through high school and college I wanted to be a veterinarian until I discovered the amazing world of exotic animals during my undergraduate studies. With a Bachelor of Science in Zoology, I was still uncertain where my passion would lead me, but with my first job as a zoo keeper the way became clear – I fell in love with the cheetah. It was the eyes of the cheetah that stole my heart – “to look into the eyes of a cheetah shows a history unknown to man” (unknown).

I first worked with cheetahs in 1987 when I took my first job as a zoo keeper at Binder Park Zoo in Battle Creek, Michigan. In 1989, I moved to Utah and worked as an exhibit designer at Utah’s Hogle Zoo. Through my zoo career I discovered the magic of wildlife in Madagascar, Kenya and Namibia. It was after volunteering for nine months on various projects in Africa that I made the decision to dedicate my life to cheetahs in the wild. I worked at the Cheetah Conservation Fund in Namibia and gained experience and the support of Dr. Marker who encouraged my passion for Kenya and co-founded Action for Cheetahs in Kenya through financial and technical support. 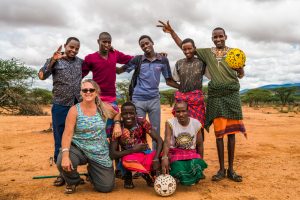 I moved to Kenya in 2001 when I started research and outreach efforts in collaboration with the Kenya Wildlife Service, East African Wildlife Society, African Wildlife Foundation and through the support of many friends and colleagues. With a team of two, myself and Cosmas Wambua, we launched research studies on the ecology and status of cheetahs in Kenya. We began on a farm in the Nakuru area, Delamere Estate and Soysambu Conservancy, where cheetahs once lived in small numbers, but had vanished in recent years. By 2004, we concluded that it would be highly unlikely for free-ranging cheetahs to exist and survive in this human-dominated landscape again. During this time, three other students on attachment to our project conducted studies on the Nakuru landscape also concluding that long term cheetah programmes (eg reintroduction) could not be sustained in this area.

We expanded our studies to evaluate the range wide status of cheetahs and in 2007 we completed the first national cheetah survey. We travelled by road to every area of Kenya where cheetahs had historically ranged. We mapped the prey, factors that influence cheetah persistence and human impact on cheetah survival. We found that cheetahs remain resident in nearly 80% of their historical range although often at very low densities. Land use change and fragmentation are the key threats to cheetah survival with retaliatory killing and trade in parts and cubs causing additional threat.

Cosmas completed his Masters studies in 2008 focused on an area south of Nairobi where we set up our first field station – Salama. We collared cheetahs in 2006 and 2010 to understand their movements as the area changed through human development with the transition of large community owned land to fragmented subsistence farm plots. Cheetah numbers dropped from an average of 29 down to only five by 2015. Although this number has persisted since that time, five cheetahs is not a sustainable population number. The lessons we learned from this area and the national survey provided the base line for collaborative work with the Kenya Wildlife Service and guides the ongoing range wide conservation of cheetahs.

In 2010, I returned to university to achieve my Master of Environmental Management from the Yale School of Forestry and Environmental Studies. We launched a second study site in Samburu at the Meibae Conservancy about 90km northwest of the Samburu National Reserve in 2015. Between 2010 and 2018, we worked with fifteen local and international students at undergraduate and master’s level projects. I co-authored two peer reviewed papers and five chapters in a cheetah book using data from the past several years.

Our project volunteers include people from all over the world who have a passion for cheetahs and the people who share their lives with cheetahs. Community projects include implementation of three cattle dips in Salama to control ticks that carry disease and reduce productivity of livestock, initiation of two bee keeping groups that use bees to conserve the environment, tree planting campaigns that have planted over 1,000 trees in the communities in which we work, rabies eradication campaigns in Samburu and Salama communities and encouragement of other small environmental caretaking projects. We have educated over 30,000 children about the importance of wildlife through movies, presentations and trips to the local parks and animal orphanages.

I am proud to lead a team of over 20 staff who share my passion for cheetahs as we continue to have an impact on saving the cheetah, reducing conflicts and encouraging environmental caretaking. We operate two field bases, and we are implementing a second range wide survey to evaluate connectivity between cheetah populations in Kenya. Genetics and corridor evaluation will play a key role in the future of cheetah management on a range wide level. We currently work with two PhD students, three Masters students and three undergraduate student (two are employees), all of whom are Kenyan nationals. One additional international Masters student joined us in June for three months. These young people are the future of cheetah conservation!