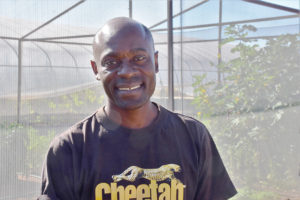 Our cheetah Champion for August is Matti Tweshiningilwa Nghikembua, the senior ecologist and forest steward at CCF headquarters in Namibia. Matti is doing a PhD in Forestry and Bio Resources. Below he tells us about the work he does for cheetahs through the Bushblok programme, an innovative conservation effort to restore the cheetah’s natural habitat and reduce human wildlife conflict.

My name is Matti Tweshiningilwa Nghikembua, employed by the Cheetah Conservation Fund as a senior ecologist and Forest Steward. I am also pursuing a PhD in Forestry and Bio Resources with the University of East Finland in Joensuu. Namibia is known to support about 50% of the free ranging cheetah population globally. About 95% of the population is found on commercial farmland and only a few individuals are in protected areas. Due to overgrazing, fire suppression, loss of mega herbivores and intensive livestock grazing practices influenced by unpredictable climatic conditions, the open savannahs on these farms were modified into thickened thornbush habitat. This bush encroachment results in a loss of suitable habitat for cheetahs and other open savannah adapted species. Injury resulting from hunting in thick bush, such as damage to the eyes, lowers the ability for cheetahs to hunt wild prey successfully and injured cheetahs may be forced to hunt livestock. In addition, encroached rangelands have poor grazing carrying capacity and reduced economic income for landowners. Poor economic income influences farmers’ perceptions and tolerance towards local predators, and promotes human wildlife conflict.

In 2005, CCF initiated a pilot project to restore encroached habitat by harvesting the thornbush and converting it into an alternative (high value) energy product called Bushblok. Encroached areas are thinned down to a predetermined vegetation density level associated with open savannah habitat without completely removing all woody plants. Harvesting is conducted according to approved Forest Stewardship Council’s (FSC) procedures and within the legal framework of the Ministry of Agriculture and Forestry policies, thus promoting a sustainable use of the natural resource as opposed to a full scale removal operation which is not considered a viable long term solution to the problem. Even though bush encroachment is considered to be an issue for many of the wide range of species found on Namibian farmlands, the primary goal of CCF’s habitat restoration programme is to increase quantities of ideal cheetah habitat as well as for the other local biodiversity. One key aim of this programme is to ensure that any restoration activities can be replicated on other commercial farms. However at present little is known regarding the rate at which natural vegetation will recover following manual thinning and what, if any, secondary impacts there may be on local fauna as a result of altering vegetation structure. Regeneration from coppicing or recruitment from seeds are both important in determining biomass dynamics of the natural vegetation.

I assist CCF with biodiversity research in different study sites on its farms. The study sites consist of previously harvested sites of different ages matched with adjacent non-harvested sites. Remotely triggered camera traps are used in order to identify the presence and abundance of local predators and prey species. Vegetation surveys are done in order to determine vegetation density, species composition, biomass yields and to understand the regeneration and regrowth dynamics of encroaching species. Soil surveys are conducted to explore the impacts of thinning operations on the composition of soils (chemical and physical) and how this may influence the natural regeneration and recovery of the vegetation. In order to complete these tasks, I work with a dynamic team consisting of CCF staff, volunteers and interns.

In conclusion, the CCF bush project is one of the best approaches to habitat restoration as it links people, cheetahs and wildlife together in order to reduce human wildlife conflict.