Posted on June 29, 2017 Categories: Cheetah Champion, Conservation, Get Involved, Life at CCF No comments yet

Hi All, my name is Amelia (Meme) Zakiewicz. I worked as the resident vet at CCF Namibia in 2012/13. It was the most amazing experience and I feel privileged to have had the opportunity to contribute to such a dynamic and diverse conservation project.

The Cheetah population has been in rapid decline in the last 100 years, they are now extinct in 20 countries. This is mainly due to habitat loss, poaching, climate change and the pet trade. The only viable population is left in Namibia but they are still listed as vulnerable. CCF’s primary focus is to protect the cheetah from extinction and re-establish this magnificent species back into safe wild populations. Over the last 27 years Dr Laurie Marker and the CCF team have worked tirelessly to achieve this. 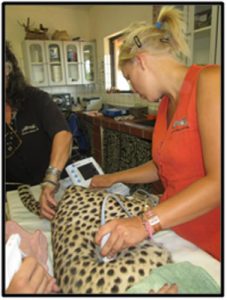 As the resident vet, my job was to work along side the brilliant cheetah team to provide health care, carry out medical and surgical procedures for the wild and captive cheetahs. When an injured or sick cheetah was brought to us our main goal was to rehabilitate and release. Where this was not possible, the cheetahs were taken in and cared for in as wild as possible environment at the CCF site. These cheetahs help to provide valuable information about the species to help assist in their conservation. It was a very rewarding part of the job but often difficult as we were working under challenging circumstances and wild animals can be unpredictable.

CCF is fairly unique as an organisation as it has a diverse approach to cheetah conservation. CCF runs various indirect projects that help cheetahs. Human wildlife conflict is a big problem; most of Namibia is occupied by farmland or game reserves. Cheetahs don’t do well in game reserves as they are the least dominant big cat and need large open spaces to hunt. Due to this struggle they often stray out of reserves onto farmland. This poses a problem as farmers want to protect their livelihood so often shoot and kill cheetahs preying on their livestock. CCF have come up with several projects to combat this including The Livestock Guarding Dog programme. The programme breeds Anatolian Shepherd dogs for farmers to use to protect their livestock. This is a fantastic and very successful project and has been a crucial part of Cheetah conservation. It occupied a large part of my job at CCF as all aspects of dog and puppy care required veterinary assistance.

Another project CCF runs is the predator friendly and commercially viable model farm. This provides a valuable tool for education and community outreach. I was often not only looking after the herd health of the sheep and goats but was teaching and training volunteers, guests and Namibians including school groups.

Since leaving Namibia I have concentrated my efforts on fund raising for CCF as part of the CCF UK fundraising team. I ran the London marathon in 2015 to raise awareness for CCF and intend to run the Brighton marathon in 2018 for CCF UK. I try to promote CCF to the veterinary world and encourage more volunteers and support.

In summary CCF runs as an integrated, innovative conservation model, working on the ethos that if we save the cheetah we save the whole ecosystem including humans.

I am proud to be involved with this brilliant charity. Dr. Laurie Marker and the CCF team have achieved unbelievable things in the last 27 years for the cheetah and continue to do so. I would recommend getting involved with CCF to everyone  and if possible to get out to Namibia and experience cheetah conservation in action.

Many thanks for your time!