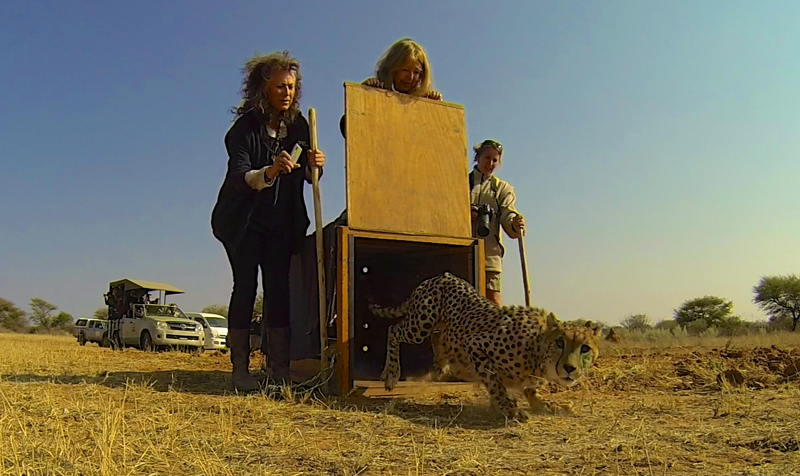 The cheetahs that changed my job description

The call that woke me up that morning in November 2005 was unlike any other call I’ve ever received. Until that day, and for the previous four years, I had worn many hats at the Cheetah Conservation Fund, my main responsibility having been strategic communications. That meant that any hard-to-deal issues would come to me, and might explain why I was the recipient of this call. A U.S. Marine stationed in a remote village in Eastern Ethiopia called to report two small cheetah cubs tied to short ropes outside a hotel, forced to fight against each other for a few coins. If he wanted to save them, he’d have to pay US$1000 for the cubs he named Scout and Patch. Patch had a badly-injured eye –probably the result of being kicked. Both cubs suffered from severe bone malformation due to poor nutrition. Being a veterinarian, our soldier knew that those cubs wouldn’t live much longer if he didn’t do something.
I strongly advised him not to pay for the cubs as it would only encourage more poaching. As quickly as we could, we mobilised all of our contacts in Ethiopia, from government to NGOs to embassies. Within a week, the cubs were confiscated by the Ethiopian authorities and flown on an official U.S. aircraft to the capital, Addis Ababa, where they were looked after. Despite all efforts, the cubs did not survive. Malnutrition and ill treatment were far too much for their small bodies. However, the publicity generated by this rescue resulted in many calls and emails like the Marine’s call in November. The cubs’ short lives brought attention to a problem that had been largely underestimated: as many as 300 cheetah cubs are removed from the wild each year to be sold as pets across the Arabian Peninsula; many more die in the process.

After that, the reports poured in, and I began to keep track of every one of them, while pro-actively seeking out and collecting information, historical and present, from every possible source, including personal correspondence, social media, internet searches, CITES (Convention on International Trade of Endangered Species) databases and media articles. Each instance was carefully assessed for veracity, and action was taken whenever possible, directly or through people on the field willing to help. While the illegal nature of the business made it impossible to determine precise numbers, each year the reports became more consistent and steadily rose. Soon we were in possession of the most extensive, unofficial case file on illegal cheetah trafficking in the world.

To this day, although we strive to collect information from all geographical locations, the core of our work is localised in the Horn of Africa region, particularly Ethiopia and Somalia, where we have a small network of collaborators. We have succeeded in a few confiscations but it is important to note that every single cheetah cub removed from the wild is a loss to conservation, as they will never have the skills needed to survive in the wild. Even when confiscated or rescued, surviving cubs will simply have to remain under human care for the rest of their lives.
While the numbers of cheetah smuggled through the Horn of Africa are alarming, lack of data from other areas of Africa does not mean that we should lower our guard elsewhere. Cheetah trafficking takes many different shapes and happens in many different places. Not only are cheetahs taken from the wild to become status symbols in the Middle East, they are also taken alive to be exploited as tourist attractions, or killed to be sold as ornaments, medicines or clothing items.

Our efforts to fight this trade span from working locally with governments and concerned individuals, to collaborating with sister NGOs such as Born Free and the International Fund for Animal Welfare, and international organisations such as INTERPOL and CITES, which since 2013 has included the illegal cheetah trade in its agenda. The focus is on demand and supply reduction through awareness and improved enforcement and collaboration. Progress is slow as funding is hard to come by, while poverty and corruption are extraordinary obstacles. Enforcement officers in the most affected areas lack training, gear or even liveable salaries, which compounded with social instability and droughts, make this not only a conservation issue, but a human one.

Public engagement is crucial. Everyone can help by rejecting any form of illegal wildlife trade, whether it is a small souvenir sold in a street market in Africa, or shaming a social media post depicting endangered species being exploited as pets or selfies. It is important to remember that the illegal wildlife trade is a multi-billion-dollar activity, the third most lucrative illegal trade after weapons and drug trafficking, but with much lower penalties.