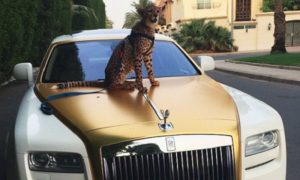 There is still a high demand for cheetahs as pets. However in many countries it is illegal to take animals like cheetahs from the wild. The illegal trade in wildlife parts and live animals is estimated to be worth billions. It is highly organised and linked to other criminal activities. Cheetah cubs are captured from the wild and then smuggled through the Horn of Africa, destined primarily for the Middle East, where demand is the highest. CCF estimates that only one in six cubs survives the journey to buyers. Cheetah cubs have specialised dietary needs that are not easily met and can easily perish due to malnutrition or inadequate veterinary treatment. Even if cubs are intercepted and confiscated their chances of survival are extremely slim.

With the help of regional partners and at the request of local governments, CCF facilitates confiscations whenever possible. Although geographically widespread, most reported cases of smuggled cheetah cubs involve the Arabian Peninsula and the Horn of Africa. Since 2005, CCF has actively participated in the fight against illegal pet trade in cheetahs. CCF’s involvement began with the confiscation of two cheetah cubs outside a small restaurant in the Somali region of Ethiopia. We now have two cheetah safe houses in Somaliland dedicated to caring for the numerous cheetah cubs that we rescue from the illegal wildlife trade.

Human-wildlife conflict and habitat loss pose a huge risk to the survival of wild cheetah populations. Cheetahs require vast expanses of land with suitable prey but as wild lands are destroyed by human expansion, the cheetah’s available habitat is also destroyed. Today, over 90 percent of cheetahs live outside protected management areas, meaning that they live alongside human communities, further acerbating the threat of human-wildlife conflict.

To the communal farmers the loss of even a single animal can be devastating. Cheetahs and other predators are looked upon by farmers not as a valuable component of a thriving ecosystem, but as a threat to their livelihoods. During the 1980’s, livestock and game farmers halved the Namibian cheetah population, indiscriminately removing nearly 10,000 cheetahs. It was in 1990 that CCF developed its Human Wildlife mitigation programmes, called Future Farmers of Africa.

To prevent further cheetah population decline, CCF works with farmers to investigate, develop and implement predator-friendly livestock and wildlife management techniques that are also exhibited at CCF’s model farm. CCF promotes these livestock management solutions in farmer publications and media, and at agricultural shows, meetings, and colleges and universities and also through farmer training courses. CCF is encouraged that there is now far greater awareness of the cheetah’s role in the ecosystem, and an increasing number of farmers adopt predator-friendly livestock management practices and fewer cheetahs are being killed. 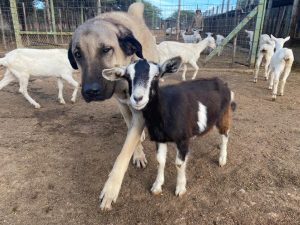 CCF’s renowned livestock guarding dog programme has been highly effective at reducing predation rates and thereby reducing the inclination by farmers to trap or shoot cheetahs. CCF breeds Anatolian shepherd and Kangal dogs, breeds that for millennia have guarded small livestock against wolves and bears in Turkey. The dogs are placed with Namibian farmers as puppies. They bond with the herd and use their imposing presence and loud bark to scare away potential predators.

CCF has been placing dogs since 1994 and our research shows the dogs are highly effective, reducing livestock loss from all predators by over 80 and up to 100 percent. Farmers adopt CCF dogs and participate in education on how to train the dog. CCF does on site follow up visits to ensure the dogs have proper training and medical care, and are settling into their guardian role. Farmers have enthusiastically embraced the programme, and there is now a two year waiting list for puppies. Since the start of the programme 25 years ago, CCF has placed hundreds of dogs with farmers. CCF research shows that the people’s attitudes towards predators are changing as a result of this and other CCF programmes. 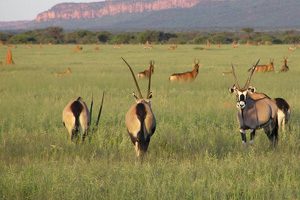 CCF has been a participant in Namibia’s innovative Conservancy movement since its inception. Conservancies are a wildlife management structure that allows the local populace within a land management area to manage and reap the economic benefit of the wildlife treasures located there. Because people in the conservancies “own” the wildlife, they are far more interested in protecting it, and areas governed by conservancies tend to be far more resistant to outside influence from poachers. CCF has been working with the local communal farmers and populations that surround the Waterberg plateau, creating a conservancy and economic development area known as the Greater Waterberg Landscape. 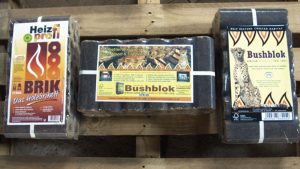 In 2001, the Cheetah Conservation Fund (CCF) and the United States Agency for International Development (USAID) collaborated to find a habitat improvement programme that would be ecologically and economically viable. CCF identified a business opportunity: processing encroaching bush into high-heat, low-emission, compacted logs for use as a cooking fuel or for home heating. CCF Bush (PTY) Ltd. was established to manufacture the Bushblok product. 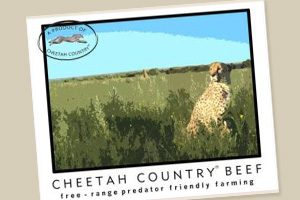 CCF has long been a proponent of promoting environmentally sound farming practices by giving producers who follow such practices the opportunity to certify as being “predator-friendly” and consequently charge a premium for their products. CCF has been involved with this movement since 2000, when we first conceptualized the notion of “Cheetah Country Beef” as a label for cattle farmers using predator-friendly farming techniques. CCF’s Dancing Goat Creamery products, and its Bushblok product, are Certified Wildlife Friendly® by the Wildlife Friendly Enterprise Network. CCF continues to look for opportunities to promote predator-friendly farming practices through eco-labeling. 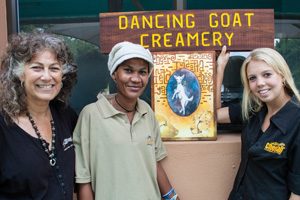 CCF operates from the principle that the key to securing a future for the cheetah is to secure the livelihoods of the human communities that live alongside the cheetah. CCF is engaging in efforts to promote increased prosperity for the humans living in cheetah country through livelihood development. The Dancing Goat Creamery produces and sells dairy products made from CCF’s goat milk, thereby demonstrating to small livestock farmers a viable source of supplemental income that can make their farms more prosperous. CCF is also undertaking efforts to produce honey via an apiary, and experimenting in grape growing for winemaking, as other efforts at developing supplementary income streams for communal farmers.