We are saddened to report the recent passing of three of our resident cheetahs at CCF Namibia, who will be missed dearly by our staff and volunteers. 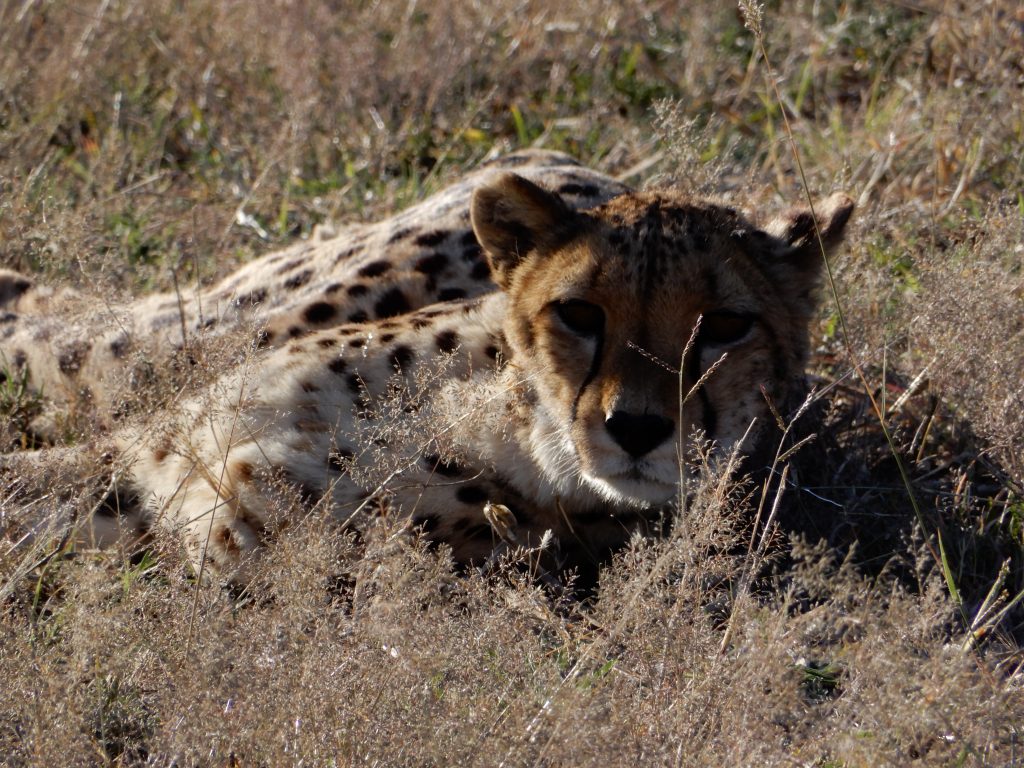 Harry, her sister Hermione and brother Ron were brought to the Cheetah Conservation Fund in 2005 after losing their mother when they were about two months old. Named after the popular characters from the Harry Potter book series, Harry was a mistaken gender determination. It was thought she was a male when she first arrived, and she had a small scar on her face, hence the name Harry. But she didn’t seem to mind the mistake, and we would always say that Harry was short for Harriet, or something more feminine sounding. It also provided us with a good opportunity to educate guests in the differences between male and female cheetahs.

We find that captive cheetahs, much like their smaller domesticated cat counterparts are very fond of routine. They like things to stay the same every day. Harry especially loved her life to be in order. She liked her food brought to her at the same time every day, to exercise first thing in the morning, and to be left alone other than that. She was an extremely intelligent cheetah and sensed the second anything was amiss. She was extremely skeptical of anything new in the enclosure, or even if her food smelled a little bit off, she wouldn’t eat it. It made medicating her very difficult, as she could smell some of the medications we would try to hide in treats or in her food. We normally start giving our older cheetahs a joint supplement, but Harry didn’t start getting it until she was much older, because she would find the tablet in the treat and spit it out every time. She would refuse to eat her piece of meat if we crushed the tablet into a powder and sprinkled it over. Doing annual vaccinations always had to be carefully planned out by the cheetah keeper team, because we would have to start training months in advance to get Harry comfortable with the catch cage that we use to safely contain them while they are injected. She knew that nothing good ever happened in the catch cage. With months of coaxing with food, and lots of praise from her keepers, she would eventually go in on the day we needed her to go in. But then we would have to start all over from square one in preparation for the next year’s vaccines.

We loved Harry’s stubborn personality, even if it made our days a bit challenging sometimes. About a year ago, we started to notice some strange behaviour from Harry. At feeding time, she normally would have run into the feeding camps at full speed and straight to her bowl. Suddenly, it seemed like she couldn’t figure out where the door was and was struggling to find her bowl. Her gait also became very wobbly and unsteady. She also became a lot calmer, and allowed her keepers to approach her, and even touch her with no hesitation. Nothing was obviously wrong with her eyes such as cataracts, but she was 14 years old, so old age related issues were something we were expecting. We moved her and her sister from the main centre to a smaller “retirement” enclosure, where they could be together, but a small enough space where Harry wouldn’t get lost and we could monitor her easily. With the assistance of our veterinary team, we started her on medication for her liver and kidneys and started giving her subcutaneous fluids every day – a procedure that would have been near impossible even a couple of years ago. Unfortunately, her age finally caught up to her, and on April 30th, 2021, the decision was made to euthanize Harry so that she would not experience any unnecessary pain or suffering. She will be greatly missed by her sister Hermione, as well as her keepers. She was an amazing cheetah, and an amazing ambassador for wild cheetahs everywhere. 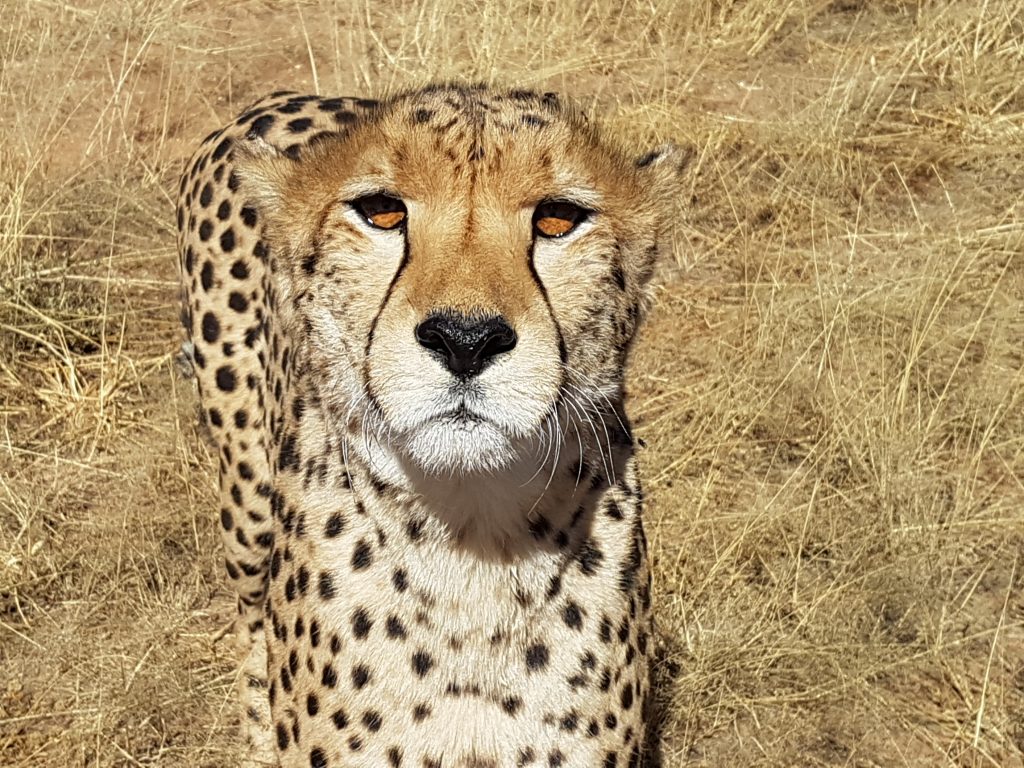 Nico came to the Cheetah Conservation Fund with his brother Koya when they were a couple months old after losing their mother to human-wildlife conflict. Due to calcium deficiencies in their diet before coming to CCF, they both came in with bone deformities and stunted growth. Luckily, they were young enough that once they were put on the proper diet with correct amounts of minerals and vitamins, they made a full recovery and grew into two beautiful males.

Though they hadn’t spent much time around people and were a little bit wild, they quickly picked up the routine of life at CCF, and got to know and trust their keepers. Nico was normally the quieter of the two brothers and would follow his brother wherever he went. If Koya was somewhere or showing interest in something, Nico was typically right behind him. At feeding time, sometimes we would separate them into camps directly beside each other. But we discovered very quickly that we couldn’t leave them separated for long. As soon as they were done eating, they would immediately start calling for each other, even though the camps were side by side and they could see each other through the fence. As long as he had his brother beside him, Nico was a very relaxed, calm cat, and was very easy to work with most of the time.

One of their favourite activities to do was the cheetah run, where they chase a piece of cloth attached to a mechanical lure system. Both Nico and his brother were always eager to run and loved showing off their speed for guests. When the cheetahs catch the rag, the keepers reward by feeding treats from a long wooden spoon. But when Nico and Koya were first learning how to run and the reward system, they made it a challenge for the keepers. If one brother caught the rag, the other would be right beside you immediately also looking for treats, even though they had not done anything! Nico especially was very stubborn and needed to be told multiple times that unless he runs and catches the rag, he doesn’t get any treats! Eventually he learned and from then on was an amazing runner. Nico was also a teacher and leader when it came time for young male named Katiti to learn how the lure course worked. Katiti was very nervous when he first arrived at CCF and afraid to be too close to people. He didn’t quite understand why the rag was moving, and why he needed to catch it. But after observing and running with Nico a couple of times, he caught on, and is now also an amazing runner, and great with the spoon and reward system.

Every single day, the cheetah keepers do a visual health check on every individual cheetah. We make sure there are no physical problems like swelling or wounds. We also check their behaviour – are they acting like the normally do, are they eager for food, or eager to do the cheetah run. These checks allow us to pick up on any health problems right away and treat them with the assistance of our veterinary staff. Unfortunately, even with these health checks, sometimes unexpected things can occur. In March of 2021, we found Nico deceased in his enclosure. A necropsy revealed nothing out of the ordinary with his organs or the rest of his body. There are multiple species of highly venomous snakes here in Namibia, and we think that perhaps he was bitten by one of these snakes. The venom can take effect extremely quickly and can be lethal if the symptoms are not detected. It was a great loss for the cheetah team, as Nico was only four years old. He was extremely young by captive cheetah standards as they live on average to be between 13 and 16 years old. He will be greatly missed by not only his brother Koya, but also the many people whose lives he touched in his short time at the Cheetah Conservation Fund. 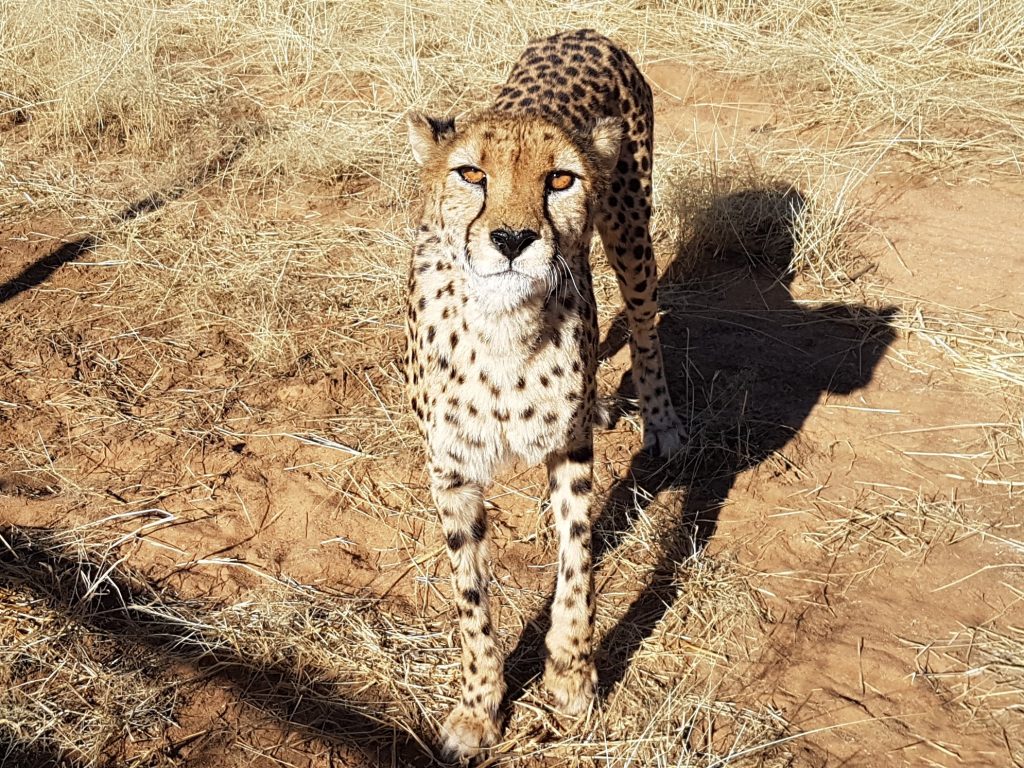 Bella came to the Cheetah Conservation Fund as an only cub in January of 2009 after losing her mother. She was approximately six months old when she arrived, so was very wild and very wary of people. Even with her wild attitude, she quickly bonded with another female cheetah named Padme. The two females were moved to a soft-release training camp on CCF’s property in 2012, where they could practice hunting while still being in a fenced in area so that CCF staff could closely monitor them. Unfortunately, the release was not successful, and they were brought back to join CCF’s permanent resident cheetahs a few months later.

Throughout her life, Bella maintained her feisty and independent attitude. She and Padme joined two other females, Kayla and Kiana, but Bella established her role as the boss. She always needed to be the first one to get food and would let everyone around her know she was in charge. Typically, female cheetahs live a solitary life, but sometimes when they come in as young orphans they will bond with one or two other cheetahs. While she would normally be close to Padme, it was not unusual to find Bella enjoying her space away from the other females in the large enclosure. After losing her friend Padme, and enclosure mate Kiana, due to old age, the decision was made to move Bella and Kayla to our “retirement home” called Elands Pen to live with two other females, Polly and Rohinitallala, and a male named Darwin. The introductions went smoothly, with the most interaction and “drama” happening between Bella and Kayla, even though they had lived together almost their entire lives. Bella continued to ignore everyone, and be an independent cheetah, unless she had to come up for food and interact with her keepers. It was part of Bella’s charm to stir up trouble around feeding time, making her keepers think of innovative ways to separate her from everyone else so that there were no fights or injuries. If she was the one cheetah that we needed to come into the feeding camps, it was the day she would refuse to go through the door, even though she would do it every single other day without a problem. And she always seemed to be the most challenging when we had guests or people watching us. You would swear that she knew exactly what she was doing. There is another cheetah also named Bella who currently lives at CCF, so we always use to joke that we had “nice, sweet young Bella” and “grumpy, old Bella”. But we wouldn’t change her personality for the world!

When the cheetah keepers go out on a daily basis to feed the cheetahs, one of the health checks we do is to monitor their behaviour. When you spend enough time with them, you get to know their individual personalities and specific habits. When Bella became very quiet, and uninterested in food, the cheetah team knew something serious was going on. While we noticed the behaviour change very quickly, she had been hiding her illness for quite a while. The veterinary team along with the cheetah team tried as many treatments as we could, but unfortunately her kidneys and liver had shut down. The decision was made to euthanize Bella so that her pain and suffering was not prolonged any further. Her fierce, feisty attitude will be greatly missed by the cheetah team, and all the people whose lives she touched in her time at CCF.

If you’d like to sponsor one of our resident cheetahs to help us continue providing them with the best care possible, please head over to our sponsorship page. 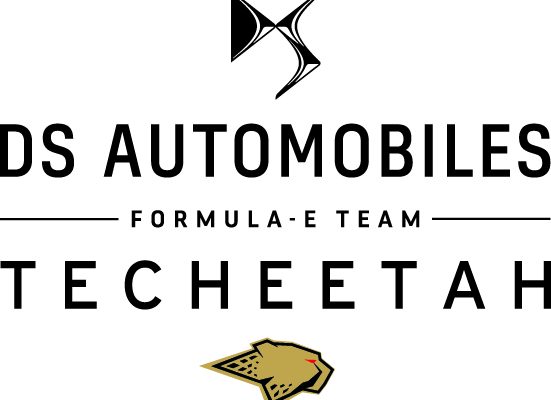 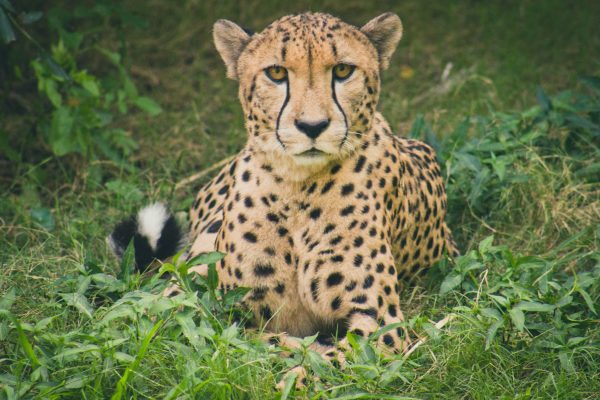 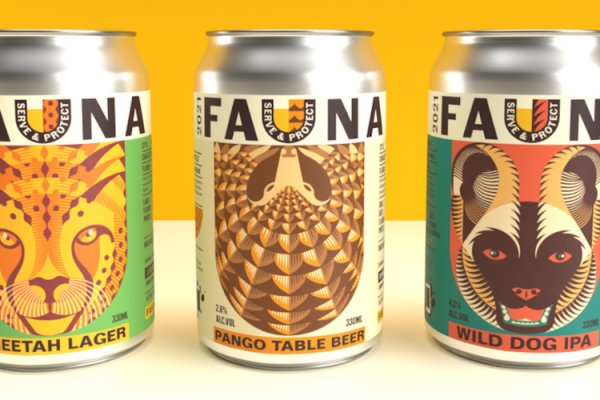