CCF has a number of innovative projects underway to save the cheetah. We take a systemic approach to our work, recognizing the importance of creating solutions where cheetahs and humans can thrive together. 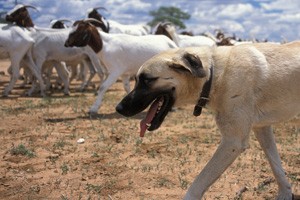 CCF’s renowned Livestock Guarding Dog Program has been highly effective at reducing predation rates and thereby reducing the inclination by farmers to trap or shoot cheetahs. CCF breeds Anatolian shepherd and Kangal dogs, breeds that for millennia have guarded small livestock against wolves and bears in Turkey. The dogs are placed with Namibian farmers as puppies. They bond with the herd and use their imposing presence and loud bark to scare away potential predators.

Read more about how CCF’s livestock guarding dogs are saving the cheetah. 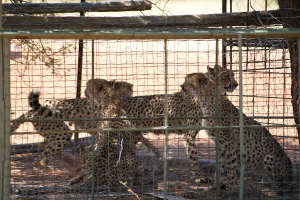 CCF monitors cases of illegal cheetah trafficking through news and direct reports, and has facilitated confiscations through the proper authorities whenever possible. Although geographically widespread, most of these reports involve the Middle East and the Horn of Africa. Since CCF began tracking the illegal trafficking of cheetahs in 2005, it has recorded approximately 800 cheetahs, cheetah cubs, or cheetah products –such as skins or dewclaw items, in nearly 200 cases. These numbers indicate that, anecdotally at least, poaching is increasing.

If you see or hear about illegal activities in involving cheetahs or cheetah products, please contact us. Your report will be handled with absolute confidentiality. 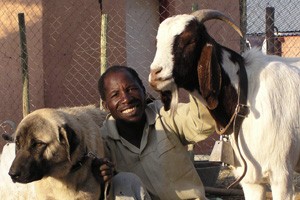 CCF operates a Model Farm that raises sheep, cattle, and goats and uses this farm as a tool to research and deploy predator-friendly farming methods, including herd management and veld management, proper animal husbandry, the use of swing gates, and other techniques. The Model Farm has become an education and training tool for farmers all over Namibia and through the cheetahs range, allowing CCF to lead by example.

Read more about how CCF is proving a model for predator-friendly farming.

As a result of unpredictable droughts, climate change, and certain livestock farming practices, native thornbush species are growing out of control and encroaching on Namibian farmlands. With 70 percent of the Namibian population involved in agriculture, bush encroachment poses a major livelihood threat to communities, the cheetah and other indigenous wildlife species. CCF is addressing issues of habitat loss for cheetahs through its Bushblok initiative: processing encroaching bush into high-heat, low-emission, compacted logs for use as a cooking fuel or for home heating.

Read more about how CCF is pioneering habitat restoration through Bushblok. 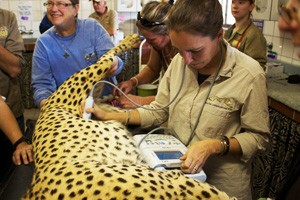