The cheetah is one of the most specialized of the 37 cat species with only one species in its genus, Acinonyx. During the 1980s, CCF and its research collaborators studied many aspects of cheetah biology including genetics, reproductive physiology, and virology. These early studies identified the cheetah’s limited genetic variation that results in reproductive and health problems. CCF’s current research focuses on a number of aspects of the cheetah’s life cycle, ecology, biology and genetics. 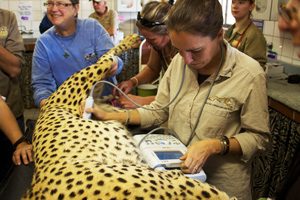 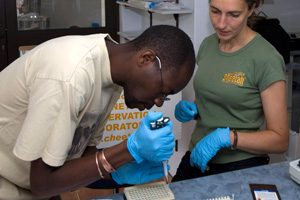 CCF is home to a world class research facility that is unique in Africa. It includes the Haas Family Veterinary Clinic and the Life Technologies Conservation Genetics Laboratory, which is the only fully-equipped genetics lab in situ at a conservation facility in Africa. From this facility, CCF collaborates with scientists around the globe on research that not only benefits the cheetah and its ecosystem, but other big cats and predators as well. The Haas Family Veterinary Clinic allows us to not only collect samples from cheetahs that we take into our facility, it allows us to provide prompt veterinary care to our cheetahs, dogs, goats and other animals when they have need.

Assuring the good health of all our residents is an important part of making conservation work here at CCF. The genetics laboratory was made possible thanks to the generous donation of PCR machines, a Sequence Analyzer, and an initial batch of reagents from Applied Biosystems (now Life Technologies) at the time of the setup and a new laser in 2012. The addition of the state of the art non-invasive laboratory for our international scat samples in 2009 was supported by the Ohrstrom Foundation. We have had the chance to be able to use a great genetic analysis software called “geneious” since 2010, for which licenses were generously donated by the company who created it (Biomatters). Additional donations from private individuals and the surplus department of the National Institutes of Health provided valuable equipment such as a UV work station, centrifuges, pipettemen, electrophoresis systems and a camera system for the visualization of DNA, spectrophotometer, scales, glassware, and other lab ware.

We want to thank everybody for their support. One of the major motivating factors in having a laboratory in Namibia is to be able to process samples locally instead of having to send African samples to the US and Europe. This has several advantages including decreasing the dependence of Namibia from other countries and allowing Namibian students to be exposed to genetic research and conservation at CCF, at the same time avoiding the complications of sample export. Since 2009 we have trained 1-2 Namibian graduates a year in the laboratory. CCF is committed to working with students, both in Namibia and abroad, and training the next generation of environmental and genetic scientists. 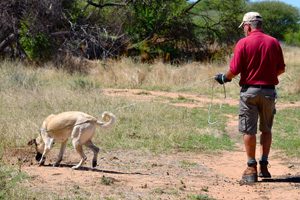 CCF has developed best-practice techniques for storing sperm, tissues and blood samples in its Genome Resource Bank (GRB), to provide ‘insurance’ for the cheetah’s survival. As a result, CCF maintains one of the largest GRB’s for an endangered species. Cryopreservation methods continue to be studied and refined in collaboration with the Smithsonian Institution in Washington DC, USA. 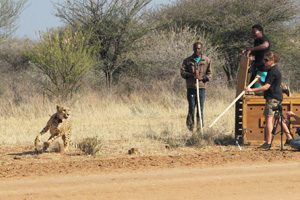 CCF investigates the movement of the cheetah to determine home ranges, habitat preference and seasonal use, territoriality, and behaviors unique to individual cheetah populations that may be critical for their survival. CCF develops and implements relocation, reintroduction, and non-invasive monitoring methodologies to ensure a viable wild population, and gathers data on the status of wild cheetahs. 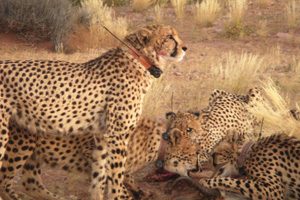 Cheetahs are very difficult to count using conventional census techniques due to their secretive nature. CCF has tested various census and monitoring techniques, including radio-telemetry, spoor track counts and camera traps, and calibrating these to existing known density estimates in its research study area. 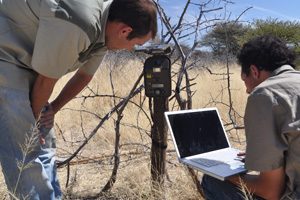 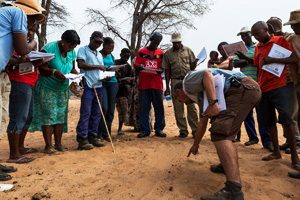