Posted on August 15, 2017 Categories: Cheetah Champion, For Kids, Our Young Ambassadors No comments yet 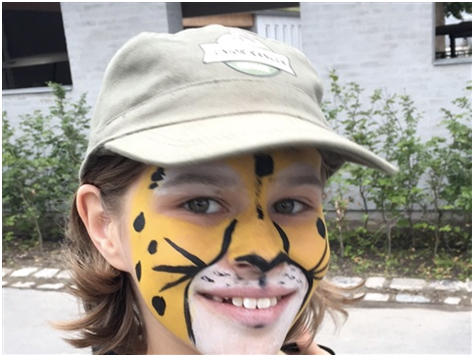 Looking after the animals and of course the CHEETAHS!

This summer I spent my time at a camp in Ree Park Safari (in Denmark) for 5 days. We were divided into 2 groups – I was in ‘the big group’: we were between 10-13 years old.

Every morning at 8am we met in front of the zoo with the guides who told us what our tasks were for the day – the first thing every morning was to get some breakfast!

Every day we had several tasks to complete. Some of them were more difficult and more fun than others. For example, it was really fun when we sailed in the canoe and tried to see who could come first. One of the guides fell into the water, HA HA HA.

I helped clean the ape-house, it was very dirty! I also helped feed the black bears, who had small bear cubs. I also made frozen food (with blood!) to stimulate the tigers and the odds – the animals thought it was a bit strange with frozen food, but I think they thought it tasted good when they finally found out how good it was eating it.

I also held a snake!

We investigated a rabbit-like animal: it was dead because it had been shot by a sniper (we were told) – I had a close look at its eyes, stomach and heart and there was poo in the stomach!

On the last day I helped feed the cheetahs and helped the guide with telling to the audience all about the cheetahs in the zoo. And then we saw the cheetahs running/hunting the food – the cheetah cubs also tried to run along to get the food.

When the week was done, I got a diploma showing that I’m now a Junior Ranger (I also did the summer camp last year)

It was a really fun week, I’m looking forward to getting old enough to work with animals every day.