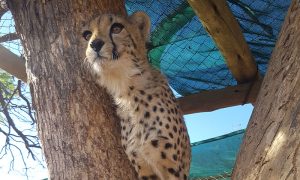 A relatively new addition to CCF Namibia, Hans was brought to the centre in late 2020 at around 6 months old. He was the only member of his family to have been caught in a capture cage on a farm, and it’s believed that his family will have left. When he arrived at CCF Namibia, he was very wild and scared and sat crying for hours, probably missing his mother and siblings. So, the staff decided to pair him with some friends as quickly as possible, and introduced him to Dom, Jaya and Rocket, who he was much smaller than but they all got on nonetheless. Wherever Rocket goes, Hans is sure to follow and the two are inseperable. Despite being much smaller than his friends, Hans thinks he’s much bigger than he is and tries to keep up with the others as much as possible.