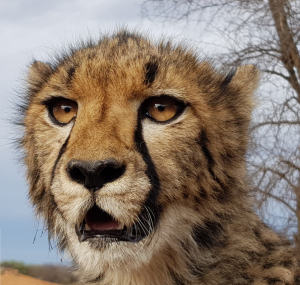 Dominic was orphaned in the Khomas region of Namibia. The Ministry of Environment and Tourism (MET) contacted CCF and staff drove out to meet a farmer reporting that someone had dropped off a cub at her farm. The farmer was looking after the cub for about a week but she became concerned when the cub started to have health problems. The farmer was not able to provide the right level of care necessary for Dominic. It is unclear how he became separated from his mother.

CCF staff picked up the cub and took him to a local vet for an initial assessment before bringing him back to CCF. He was around 10-14 days old, with his eyes barely open and was so young his teeth hadn’t developed yet. CCF staff prepared and sterilized a nursery area for Dominic and began a feeding schedule of cat milk supplement every three hours. The little cub has been very responsive to care, and became very active with lots of chirping and purring at feeding time. He has grown to become a healthy cheetah thanks to the loving care of the CCF staff.