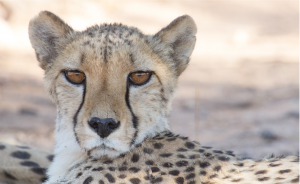 Harry came to CCF in September 2005 from south Otjiwarongo with HER two siblings, Ron and Hermione. CCF was called by a farmer who had hand-captured two cubs with a third still out in the bush by herself. They were easily caught, due to their young age and weak condition. It appeared they had lost their mother. Sadly, her fate remains unknown. The third cub was caught a week later.

Harry is named after J.K. Rowling’s famous wizard because she had a small lightning-bolt-shaped scratch under her right eye when she arrived. She is very shy around people and will wait until her siblings, Ron and Hermione, approach new people first.