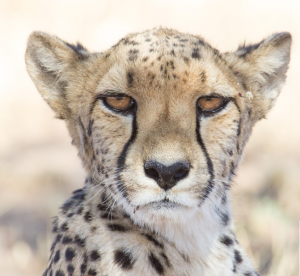 Hermione came to CCF in September 2005 from south Otjiwarongo with her two siblings, Ron and Harry. CCF was called by a farmer who had hand-captured two cubs. The third was still out in the bush. It appeared that they had lost our mother. Sadly, her fate remains unknown. The third cub was caught a week later.

Hermione is named after one of the characters in the popular books by J.K. Rowling and is the smallest and darkest of the three siblings; also the most playful. She has a small teddy bear face and big dark eyes. She is very gentle by nature, but not as much as her brother Ron. She tends to follow Ron’s lead during feeding. Hermione is the most social and will chase her brother and sister around the pen even though she is much smaller.