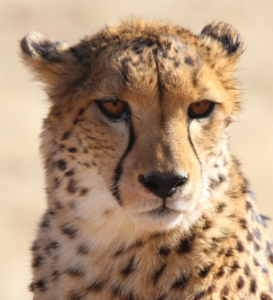 Khayjay is one of the four Okakarara Cubs, which were brought to CCF when they were only a few weeks old in 2010. Khayjay and his brother Peter and his sisters Senay and Tiger Lily live together at the CCF Centre and are being specially trained to be Ambassador Cheetahs. They will meet visiting school groups, distinguished guests, farmers, and other people from all over Namibia, and will teach everyone they encounter about the cheetah and its race against extinction.

Khayjay is one of the most enthusiastic runners among the OK Ambassadors and enjoys the special treat of a bloodcicle – a frozen treat containing blood and meat bits.