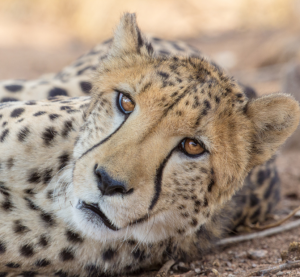 Koya came to CCF in July 2017 with his brother, Niko, they were about six months old. The two cubs had been at a small holding north of Otjiwarongo for over two months after being captured and sold by the local butcher to to the people CCF received them from. The two cubs had been kept in a small chicken coop, fed a poor diet of offal and fatty meat with no calcium or vitamin supplementation and were suffering from early stage metabolic bone disease. Koya had had no exercise, so was very overweight.

When the brothers first arrived, they were very nervous and cautious of people. Now, Koya is very confident and loves stalking birds. He always comes running over to greet his keepers and has learned how to run on our lure course to stay fit and healthy. He spends most of his day with his brother Niko exploring their enclosure together and meeting other cheetahs at the centre. Because the brothers will be resident cheetahs, they are going through some training with their keepers to make their life here as stress-free as possible e.g. crush cage training, injection/blood draw training, feeding at the centre with the other cheetahs and most importantly, making friends with the other cheetahs.