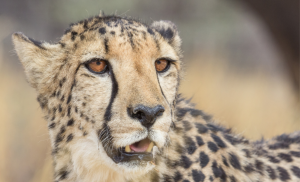 Little C was orphaned at about six weeks old and was kept alive by the big heart of a young Namibian boy. The boy, a young farmhand, found him in a tree not long after Little C’s sibling had been killed. The boy hid him in a chicken coop and shared his food rations and goat milk with the small cheetah. The boy successfully hid him for nearly a week from his parents and the farm’s owner. His parents found out and notified CCF. Because of the care of that little boy, Little C is now a resident cheetah at CCF.

Little C’s name was taken from Chewbakka, our late cheetah ambassador, whom we affectionately called Big “C”. Little C arrived at CCF at just a few weeks old and was hand-reared. He is extremely comfortable around humans.