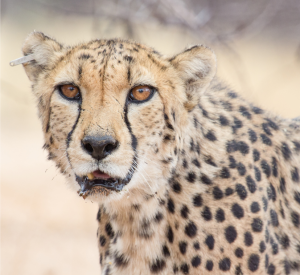 Livingstone came to CCF in April 2007 with five other cubs of the same age from a farm in Gobabis, close to the Botswana border. They were in a 4 x 8 metre cage, with no sun and a concrete floor. They had been separated from an adult female; most likely their mother. All the cubs had severe calcium deficiency and several had minor rickets and minor cataracts because of malnutrition. Although the cubs were about a year old, they appeared to be only eight months because of their poor health. All of them got a lot better with a proper diet and lots of space to run around. Livingstone along with his coalition mates – males Fossey, Mendel and Darwin, and females Kayla and Kiana – were trapped after they had been seen hunting Blesbok and Springbok. Whether the cubs and the adult female were related is unclear but they were closely bonded to each other.

Upon arriving at CCF it was decided to name the males after famous scientists and researchers and they are collectively known as the ‘Scientists’ and the males have lived together since. Livingstone is one of the smaller Scientists (along with Darwin) but is an extremely feisty character. He always approaches people in a distinctive hunched over posture and is not shy in coming up close and slapping his paws on the ground with hisses and spits. The spots on his forehead are often described as forming the letter ‘M’.