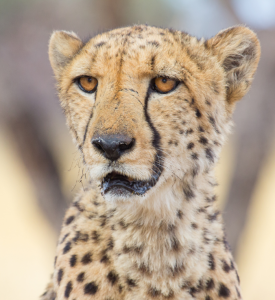 N’Dunge and his brother Shunga were only two months’ old and orphaned when a farmer discovered them on his land. It was June 2008; they were wandering near the sheep and goat corral and were considered threats to the livestock. Therefore, CCF was called to pick them up.

N’Dunge (or Smart Man) was named by a volunteer that helped raise him because of his intelligent demeanor. He and his brother Shunga are virtually inseparable, and very difficult to tell apart. N’Dunge and his brother spend their time lounging around in the sun. N’Dunge has a small build and a perfect cheetah face, with tear-marks that run precisely to the corners of his mouth.