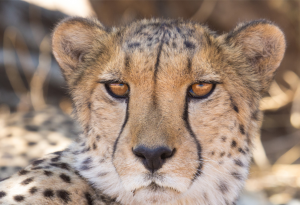 Peter was caught by a farmer in the Khomas Hochland area, east of Windhoek, when he was about one year old. CCF does not know what happened to the rest of his family as he was too young to be on his own at that stage. The farmer gave him to a lodge, and he was kept there as a companion for their tame cheetah. However, they never got along and after a year the farmer decided he did not want Peter anymore. Peter was welcomed to CCF’s centre in June 2006.