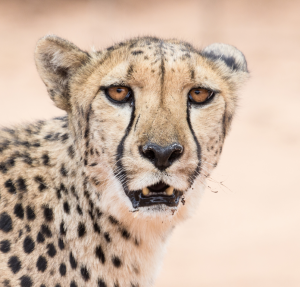 CCF had been following Polly’s mom via satellite radio collar for a year, and in July 2009 a farmer called to say the mother was found dead. CCF staff knew that she had cubs, so, working with the farmer, they set catch cages and caught Polly with her three siblings after about a week. They were under three months’ old. They now live at CCF.

Polly is the only female of the four cubs and is named after Polly Hix, a donor of CCF. She is playful and never misses an opportunity to pounce on and wrestle her brothers until they respond and play with her.