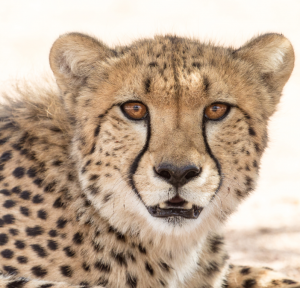 Sasha came to CCF in January 2018 at around five months old. She was rescued by a farmer who found her on his farm sick and weak. She was turned over to CCF for rehabilitation. During her first week at CCF, she had a routine checkup and a mass was found in her stomach. She had emergency surgery to remove the item, which turned out to be a chewed up rubber ball. After rest and care from her keepers, she recovered very well.

Since her surgery, she has moved to a much larger enclosure and has grown up fast. She’s very feisty and likes to let everyone know how she’s feeling with her loud chirps and calls. She loves to sit up on the highest mound in her enclosure so she can watch over all the other cheetahs and see when more treats are coming. She has learned to play and run and was slowly introduced to some of the other cheetahs as she grew older and bigger.