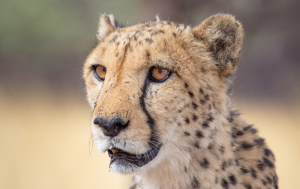 Shunga and his brother N’dunge were found without a mother in the Gobabis region and were brought to CCF in July 2008 at the age of three months. A farmer found the two wandering near the sheep and goat corral, and considered them a threat to his livestock. They were found without a mother and were therefore caught and brought back to CCF where they were hand-raised by CCF staff. The two brothers were very quickly introduced to another young cat called Little C and the three have forged quite a bond and are now almost inseparable.

Shunga (or Blonde Man) was named so by a volunteer because of his light-coloured coat, and other than that one, slight difference, he and his brother N’Dunga are virtually impossible to tell apart. Almost like identical twins, the two stick together through thick and thin. Shunga is a very laid-back cat, usually sleeping through the day near his brother. As a runner, Shunga has a beautiful stride and always acts as if chasing the lure were the best game ever invented.