Cheetah Conservation Fund UK > What We Do

CCF is the world’s leading organization dedicated to saving the cheetah in the wild. Founded by Dr. Laurie Marker in 1990, CCF has created a set of integrated programs aimed at addressing the principle threats to the cheetah.

CCF’s conservation programming is rooted in scientific research. CCF maintains a research programme on the biology, ecology and genetics of cheetahs that publishes papers in peer-reviewed journals annually, and currently operates the only fully-equipped genetics lab at an in-situ conservation facility in Africa.

Using this research as an underpinning, CCF has created a set of integrated programmes that together address the threats both to the cheetah and its entire ecosystem, including human populations. CCF operates from the principal that only by securing the future of the communities that live alongside the cheetah can you secure a future for the cheetah. Helping people helps cheetahs.

Learn about the cheetah and what we do to help it win the race against extinction: 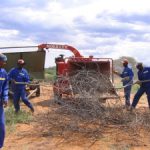